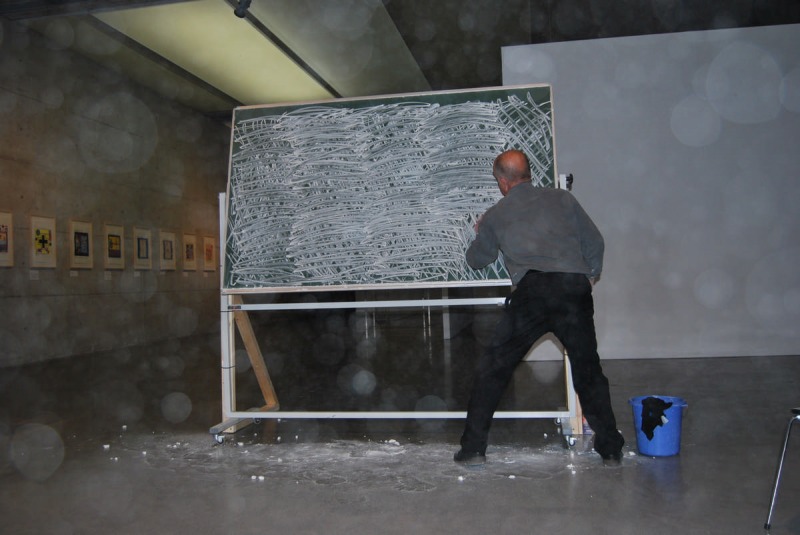 Jarosław Kozłowski is one of the leading conceptual artists coming out of Poland. He initiated the international artistic network NET (1971) and took part in the artistic movement Fluxus. During the 60s and the 70s he was engaged in analytical reflection and linguistic studies as well as performance art and was considered one of the most consequential conceptualists. In the 80s, the artist began to create large-scope installations in which he criticized of how art functions in society, there were series of works devoted to de-mythologizing art. During the 90s and until the present time, Kozłowski has been the author of a number of spectacular installations in which he deals with problems of modernist traditions and the social and political context of art.
Born in 1945 in Srem. In the years 1963-1969, he studied painting at the State Graduate School of Visual Arts in Poznań (today the University of Arts in Poznań), where he has also taught (painting and drawing) since 1967. In the years 1981-1987, he served as the academy`s rector. He has also taught at Statens Kunstakademi in Oslo (1992-1997), Rijksakademie van Beeldende Kunste in Amsterdam (1992-2004), Academy Without  Walls in Lusaca ( 1999, 2001),and at the Faculty of Pedagogy and Fine Arts of the Adam Mickiewicz University in Poznań (2005-2010). In 1971, he initiated the NET project- an international artistic exchange. Between 1972-90, he founded and then ran the Akumulatory Gallery in Poznań, which presented the work of Polish and international avant-garde artists. In 1991-1993, he was programming curator of the gallery and collection of the Centre for Contemporary Art Ujazdowski Castle in Warsaw. Fellowships with The British Council in London (1979) and DAAD Berlin (1984-85). He lives and works in Poznań.