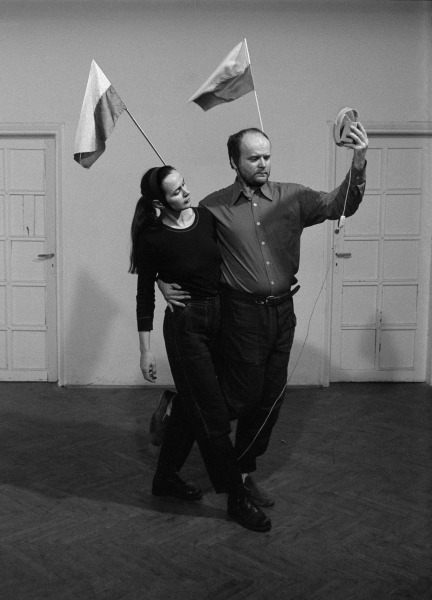 KwieKulik was an artistic duo consisting of Zofia Kulik and Przemysław Kwiek, who were active in this constellation between 1971 and 1987, which was also the time of their partnership. In this period, KwieKulik carried out countless performances and artistic demonstrations and produced many objects, films and photographs. They postulated connecting politics with art, their practices being a deep resistance to Soviet totalitarian communism and a commitment to the fundamental values of democratic socialism, including self-organization and the solidarity of public life. Their work also always included others and they believed in the possiblility of smooth cooperation with other artists, in the possibility of collective work, free from the problem of authorship. Yet their proposal of truly democratic, modern, scientific, self-organizing systems were thwarted both by the regime and the polish neo-avant-garde milieu. As a response to this rejection, KwieKulik set up a private gallery in their home, which they named the Studio of Activities, Documentation and Propagation (PDDiU). It was an artistic-politcal project that transgressed the distinction between the public and the private, making art that challenged the state’s monopoly for ‘common’ themes. In the frame of this special place, they organised lectures and exhibitions and embarked on the documentation of the artistic life in the 1970/80s. Their creativity was of a radical, social and political dimension, it was a laboratory form of contemporary art.