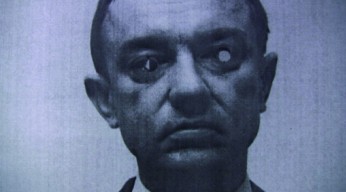 Three Videos with NarrationOpening: March 19, 2010, 6-9pm ŻAK | BRANICKA Gallery takes great pleasure in presenting the most recent work of Agnieszka Polska: "Three Videos with Narration". Polska is one of the most interesting Polish artists of the younger generation (born 1985), whose work has been shown at the KW Institute for Contemporary Art in Berlin, the Kunstbygning in Aarhus and the Zacheta National Gallery of Art in Warsaw.
The source materials of Polska’s videos are photographs taken from prewar newspapers and art magazines from the 1960s, which she animates. Polska is interested in the aesthetic of old photographs; their poor quality or raster, which in turn lends itself to giving the animation an old fashioned documentary quality.

"Three Videos with Narration" is an ironic triptych exploring a history of misunderstandings, omissions and black holes in art history. The artist states: “Misunderstandings, misinterpretations - these are the factors which push culture forward, creating new qualities and posing new questions. The archive - as each and every living organism - lives and changes without ceasing, endlessly multiplying images of itself. Elements which have been negated and rejected in the process of archiving later emerge as the dark matter of our subconscious.”

Polska treats art as an archive and takes on the role of an archival critic or librarian. She is interested not in that which is left to be archived, but that which has been forgotten. “I was thinking about the gap that appears between the knowledge of the art critic and the knowledge of art history. The moment that the art critic stops taking an interest in the work of art, it's often forgotten for the same period of time, before art history is ready to value it once again.”

The protagonists of the two films "The forgetting of proper names" (3:45) and "My favorite things" (5:35) are the works of the artists Robert Morris (Three L-Beams, 1965), Robert Smithson (Nine mirror displacements, 1969), Walter de Maria (The New York Earth Room, 1977) and Wolf Vostell (In Ulm, um Ulm und um Ulm herum, 1964) amongst others. In Polska’s two videos, she deprives the works of their primary context and they consequently lose the function they were meant to have, and are finally grouped as an absurd collection devoid of meaning. Turned into a joke, they become caricatures that have nothing in common with the original intention of the artist. They become a type of prop with which one can kit out a dolls house.

The video "Sensitization to colour" (5:02) refers to the performance of the same title made in 1968 by a Polish avant-garde artist, Włodzimierz Borowski. Borowski, one of the key artists of the Polish conceptual art movement, has, granted, taken his place in history, but is to this day not rightfully appreciated. The performance can be described as painterly and colourful and was documented in black and white photographs, which Polska used as a basis to rebuild the space in which it was originally enacted. She uses materials only in greyscale. The film, which can be taken as a commentary on the process of understanding art from the past, shows a new space for the performance, one that has been abandoned by the artist and all viewers. "Sensitization to colour" is thus a hypothetical reconstruction of a work of art on the basis of presently available photography and studies. Polska as an archeologist reconstructs the work. What accuracy does this reconstruction have? Is the myth of the artist a truthful representation?

The exhibition "Three Videos with Narration" questions the ways and intentions of writing the history of art. Are we, after all these years, able to reconstruct the past and correctly interpret art, based only on fragmentory information? And in the end, the artists’ first intentions, or even those ellusive elements like humour or irony are often distorted, and art loses its primary context. Polska applies Freud’s theory “These are cases in which a name is in fact not only forgotten, but wrongly remembered” to the visual arts.