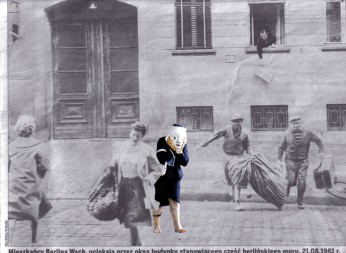 The Hypothesis of the Stolen Image
Opening: 12. 12. 2008 6-9 pm
Exhibition: 13. 12. 2008 - 31. 01. 2009
Since its inception, photography has enabled the media to spread unlimited amounts of images endlessly, but within this growing mass of pictures, certain images have tended to single themselves out. Engraved in public memory, they seem familiar and they seem to represent the entirety of what they portray: the horror of war, the psyche of a leader, or the despair of refugees.  Anna Baumgart uses some of these famous press photographs as the points of origin for her work.
She extracts the represented figures, moulds them skilfully into life-sized sculptures and paints them true to the original photograph. In her process, Baumgart leaves out everything that cannot be seen in the photograph: half of each sculpture remains white. When viewed from the front the sculptures appear life-like, but any other angle betrays the illusion. In this way Baumgart reminds us that the allegedly significant photographs show only a fleeting moment, a tiny, two-dimensional cut-out of reality.  Baumgart used this technique for the first time with her works „Natascha“ and „Veronika“ (2006). The former title refers to an image of Natascha Kampusch and the latter to a well known photograph of a victim of the terrorist attack on the London metro system. In the latter, the bandaged face of the unknown woman represented in this photograph became the synonym of the horror of the attack. The title of this work takes its name from Saint Veronica who is said to have offered Jesus a cloth to wipe the sweat and tears off his face en route to his crucifixion. The cloth was miraculously imprinted with his image and thus became “the true image”, or “Vera Eikon.” Baumgart’s “Veronika” shows an exaggerated bandage on the figure’s face but behind, one finds merely a white backdrop - there is no “Vera Eikon” and we can never know what really happened behind the scenes.  ZAK ׀ BRANICKA shows „Veronika“ for the first time in Germany as well as her latest work, "The Hypothesis of the Stolen Image" (2008). The point of departure here is a famous image of East Berliners escaping from houses in August 1961 that would be imminently sealed off by the construction of the Berlin Wall. Using her now established technique, Baumgart extracts the figures, seen climbing through windows or walking away towards the photographer carrying their belongings, re-creates them as sculptures and half paints-them. The effect produced by this group in the photograph is somewhat uncanny, some figures are visible only from the waist up as they hang out windows. Baumgart suspends those sculptures from the ceiling. On another, the back leg of a woman is stencilled with “Reuters/Forum” representing the photo agency credit in the original photograph from August 18th, 1961.  With her title, “The Hypothesis of the Stolen Image”, Baumgart adds further dimensions and uncertainties to the original story. The title originated from that of the film, “The Hypothesis of the Stolen Picture”, which was based on the novelist, Pierre Klossowski’s, ideas of art criticism. Filmed by Raoul Ruiz in 1979, it was a highbrow cult film of French cinema and involved a story about a series of paintings owned by a collector. The collector shows off his paintings to another collector, but, as he does so, the characters depicted in the paintings come to life. As in Baumgart’s work they unhinge themselves from a fixed surrounding and change their meaning. As Tableaux Vivants, they begin to mock the pretensions of the collector. One painting is missing from the collection, an unexplained scandal lurks behind its disappearance, and even the name of the artist is revealed to be false. Suddenly the understanding of the collector becomes uncertain.  Baumgart extends this metaphorically in her work, noting that “[a] character caught in one picture steps out of the photograph like from a movie screen and 'takes a walk' in another image. This 'visit' of one visual and mental tale within another is also a duel between two gazes, two lenses”. She adds, “What could hypothetically happen if two stolen looks met and started their own new lives without control of the authors of the original pictures, creating a new hybrid narrative between reality and fiction. This new narrative does not yet have its picture and thus becomes a hypothesis of a [nonexistent] image.” The viewer, even when cued by the artist’s intentions and the background of the photographs, is still free to form his own narratives about what might or might not be going on: who are these people, are they real? What happened to them, what will happen to them? We write these “hypothetical” stories in our heads out of the whole cloth of the appropriated images that were once seemingly clear in their meaning.
Text: ZAK BRANICKA, based on the catalogue text by B. Kouwenhoven  In cooperation with Gallery Lokal_30, Warsaw Realised with the support of the Foundation of Polish-German Cooperation