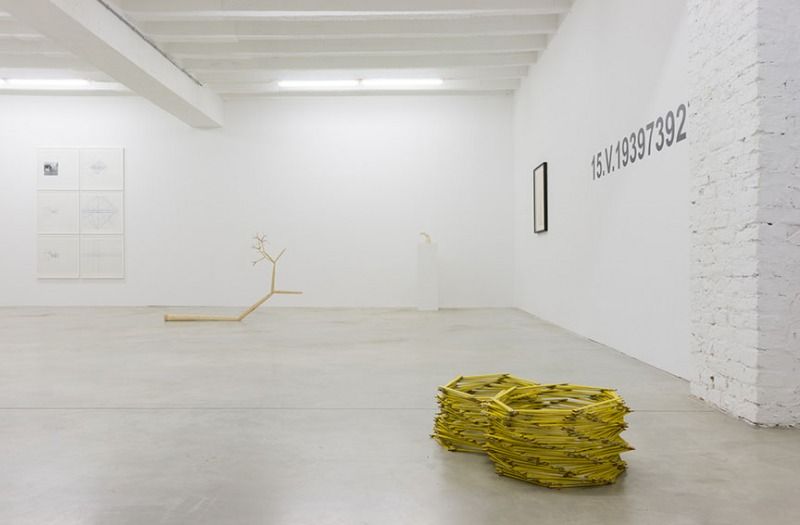 The Admirable Number Pi (group show)
Opening: Friday, 26 June 2015, from 6 to 9pm
Exhibition: 27 June – 12 September, 2015
ŻAK | BRANICKA is delighted to present The Admirable Number Pi, a group show whose title was inspired by a poem by Nobel-Prize-winner Wisława Szymborska. The exhibition includes artists from two generations: pioneers of the conceptual movements of the 1960s and 70s (such as Buren, Dróżdż, Dibbets, KwieKulik, Merz, Wasko) and artists of the younger generation (Horvat, Kudlicka, Kobylarz).
The exhibition focuses on infinity, which in Szymborska's ironic, though deeply philosophical poem is symbolized by the Pi symbol:

"(...)The pageant of digits comprising the number pi
doesn't stop at the page's edge.
It goes on across the table, through the air,
over a wall, a leaf, a bird's nest, clouds, straight into the sky,
through all the bottomless, bloated heavens.(...)”

A longing for infinity and to catch the fleeting moment appears in the work of an icon of Polish concrete poetry, Stanisław Dróżdż. In Date of my Birthday, (1975) Dróżdż put various numbers after the date 15.05.1939, as if seeking to narrow the event down to the microsecond. The chain of random digits loses its original significance and becomes a metaphor for the infinity of time. Things are much the same in his Continuum (1973), which stretches the limits of mathematics to where it blends with philosophy.
Vlatka Horvat also measures infinity. In the For Infinite Distance (2011) sculpture she shapes out of old-fashioned wooden rulers the slender, flowing sideways figure eight (the mathematical symbol for infinity: ∞). The rulers hop in zigzags, get the hiccups, unable to find where they began measuring, and so everything begins all over again… infinitely. Until they finally discover that the meaning of infinity's existence is that every centimeter forward takes them further away from the goal. This is much like traveling towards the horizon, which Jan Dibbets strives to reach in his photographs Sea Horizon of 1973. Dibbets plays with perspective: his focus is on reality and illusion, on what truly exists in nature, what the human eye sees, and what geometry and perspective presume. Ryszard Wasko draws from the same idea in his work Hypothetical Checkpoint Charlie (1988). In his drawings, based on a process of geometric analysis, he deconstructs a photo of Checkpoint Charlie in Berlin until the site becomes no more than an assortment of straight lines.
Back in the 1960s, the main representative of Arte Povera, Mario Merz, proved that nature is the creator of Mathematics. The drawing Igloo (1970) is devoted to his fascination for the Fibonacci sequence and its infinity. The question arises: Does Nature repeat the rules of Mathematics, or the other way around, does Mathematics recreate the rules of Nature? It is a question that reminds us of another one: Which came first, the chicken or the egg? Szymon Kobylarz builds the ideal trees whose shapes are based on a digitally generated fractal image. The artist assumes the role of the skilled carpenter, bringing them to life by his own hand. The KwieKulik duo also conforms certain mathematical and logical operations to art in their work titled Siewierz – A Plate and Activities with Mercury of 1975. The artists shape drops of mercury falling from a shattered thermometer into patterns that illustrate set theory, hypothetical atom structures or planetary systems. This work next to many other KwieKulik projects, and according to the artists, proofs that the limited number of spatial relationships between objects (ten basic relations) can produce an infinite number of Aesthetic Time-Effects.
The Admirable Number Pi is a duel with numbers, words, and pictures, where nature comes out on top. The tears mathematicians have shed for the "imperfect perfection” of numbers are dried by the sighs of artists delighting in the precision of words and errors. In the works from her series A Divided Dot, Marlena Kudlicka is fascinated by error and the point as a mathematical and typographical construct. The artist analyzes the spatial relationships of a point, despite the fact that, from a geometrical perspective, it is an infinitely small space, a place devoid of dimensions. How far does infinity reach if we cannot even ascertain where it begins?