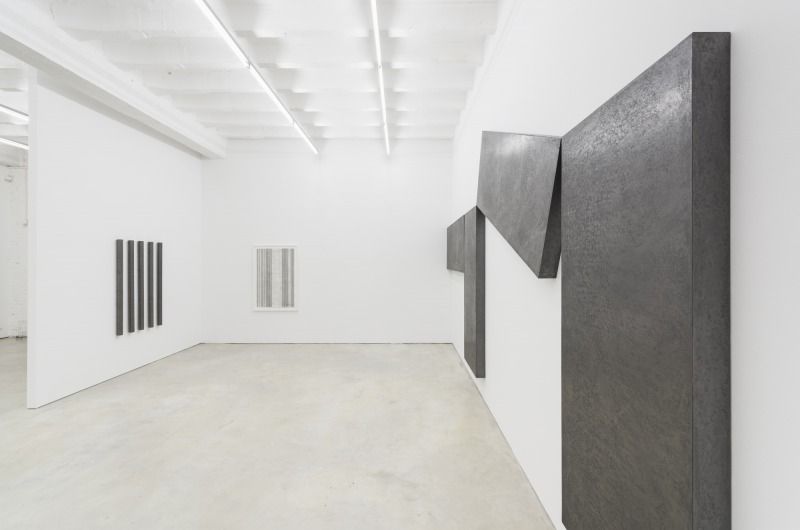 Extended Meaning
Opening: Friday, 14 September 2018 from 6 to 9 pmThe show is open in parallel at Kunstraum Botschaft / Camões Berlim:Kunstraum Botschaft / Camões Berlim, Zimmerstr. 55, 10177, Berlin
Exhibition: 24 November, 2018 – 16 February, 2019
ŻAK | BRANICKA is delighted to present the exhibition Extended Meaning with works by Diogo Pimentāo–the artist’s first solo exhibition in the gallery’s Berlin space.
The best way to describe and understand Diogo Pimentão’s art is from a quote by Tim Ingold ‘Thinking through Making’. His artistic world pulls upon the deep instinctual drive that blends the need for pushing the parameters of his focus to their ultimate limits, whilst mixing it with an innate sense for performance. It’s a dance of extremes. The proportions of his own body, his height and length of his arms, determine his work. This sense for physicality stems from Pimentão’s childhood. He grew up on the coast of Portugal, surfing its waves and diving from its cliffs. His rhythm was that of the beach, where skateboards were more the norm than books. He would draw what he could sense and feel. And by following his intuition, he found his way to art school.
Pimentão’s strength lies in his curiosity and deep fascination with materiality, particularly, that of paper. His constructions border the line between drawing and sculpture. At first glance, these minimalistic objects feel as if they are molded out of bent metal instead of folded paper. His graphite surfaces shimmer in the light, radiating sheen like polished lead. Pimentão’s works defy all the properties of what they appear to be, raising far more questions then they answer. By his own accord, he doesn’t prescribe to any conscious connection to Modernism. It’s a language in the same hemisphere of his thinking yet it isn’t his governing discipline. His works share a familiarity with the Icelandic artist Kristjan Gudmundsson’s pieces from the late 1970’s. Constructed from pure graphite blocks combined with paper rolls in a Donald Judd like simplicity, Gudmunndsson referred to them as ‘Potential Drawings’. Pimentão goes even further, as his emphasis isn’t merely in the result of his efforts but the process used to attain it. The making of the work is a part of the piece, a performance of sorts capturing the immediacy of the action. Pimentão’s sculpture drawings vary in size, shape and surface applications. Some have the urgency of a Richard Serra oil stick drawing while others fall into their final configuration like Robert Morris’ felt sculptures. In his most recent pieces exhibited at ŻAK | BRANICKA, from the series Untold (synthesis) 2018, large paper constructions have the feel of Alan Charlton’s early minimalistic grey paintings, as both use their forms as building blocks to create the selected space. Starting with a blank sheet of paper, he manually applies the graphite using the whole weight of his body, until we are left with a glossy metallic-like surface, scratched and scuffed from all the physical effort put into it. Each scratch on the paper tells the story of a particular action and is connected with a singular gesture; taken together, the motions that produce these marks are much like a performance that the artist carried out in his studio.
Another new direction by Pimentão is an installation from his new series titled  … (program) 2018, consisting of hand molded small sculptural objects made from concrete and graphite carved with letters and symbols found from children’s school papers. There’s an old Nordic tradition of using found objects such as stones, shards or pieces of wood as points of power and protection. The bearer would carve a mark leaving something of them upon it. Over time, these objects of myth and mystery would pass from one hand to the other, always going to the one who was in greater need. Tradition has it that they have their own history, as patchwork quilts made of all those who carried them. Kept in pockets or bags, these amulets of protection rub with times passing, rounding their edges smooth, oiled from the fingers’ touch. They appear far heavier than what they are, as a life’s stone is what we build our hope from. Rhythmically inspired and performance enhanced, Pimentão is a story teller whose process of creating is a dance that pulls equally upon the thrill of its making as it pushes the limits of the materiality used.