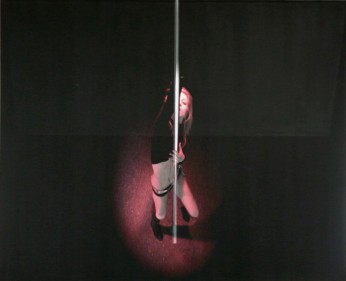 Afterparty
Opening on Friday, September 25, 2009, 6-11 pmThe Afterparty is set at a strange apex of suspension. Does it have an end point? Or could it be a permanent state? The moment when music still drips out of the ears and alcohol wades around in the brain, and when broken glass groans underfoot – it is the moment when everyone is gone and an uncomfortable silence takes control. Make-up streams down the empty faces, and behind the boarded up windows, a new day wakes up a city and you feel like a clown. You see and understand too much to admit the truth. The Afterparty is the end of levity. Exactly at this moment, these few seconds when time has delayed itself, is the topic of Domink Lejman’s work.

Lejman’s technique is innovative: he projects video onto the dark surface of monochromatic, abstractly painted canvases – in this way the surface of the canvas and the projection are optically merged. Despite Lejman’s depriving both media of their autonomy, he considers this work as a pure painting process with projector’s light seen as another layer of both the brush and its stroke. In that way, the traditional painting takes on a new factor: time. Domink Lejman’s paintings are time-based paintings.