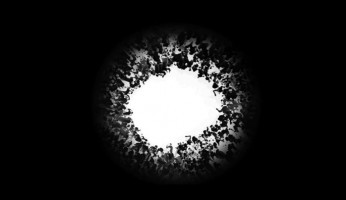 Opening: September 9, 2011, 4 to 9 pm We are delighted to present Dominik Lejman’s second solo exhibition, entitled Far too Close, at  ŻAK | BRANICKA Gallery.
Based on his unique technique of merging painting with video Lejman uses his language to focus on the tension between the individual and its environment. One of his central issues here is the question of how architectural spaces influence and determine the individual’s movement within it. Through overlaying his recordings of these movements the emerging amorphous masses form geometrical patterns, hence depicting the architecture of the respective places. Very often Lejman therefor chooses highly symbolic places: In his work Fundamental Layers (2010) the pilgrims circling Mekka appear like a torrential river seen from a bird’s eye view, while the praying practitioners at Jerusalem’s Wailing Wall shape vibrant lines. In this way Lejman creates symbolic architecture or abstract, biomorphic drawings out of real characters.

The exhibition’s title, Far too Close, refers to the macro- and microscale at the same time. While observed from a distance Lejman offers us a superior structure, a molecular-like order of interpersonal relationships arise when we approach the work. For his most recent piece shown in this exhibition, 60 sec. Cathedral (2011), Lejman hired a group of skydivers, who on his instruction performed a recreation of the stellar arch of the cathedral of Durnham (UK) in the sky. Several dozens of participants needed to exercise this choreography on the floor in order repeat it afterwards several thousand meters above the ground. During the performance in the air this stellar structure lasted barely 60 seconds before the group split into its single elements again. Lejman’s works unveil a paradox fragility and elusiveness in the social, religious and political structures that he depicts: They exist within a particular timespan at a particular location, Here and Now, and can possibly dissolve at anytime. This delusive structural longevity is what Lejman is intrigued by.

Simultaneously to the exhibition at ŻAK | BRANICKA, Dominik Lejman’s video-installation Double Layer (2011) is presented at the European Parliament and in the Gardens of the Royal Library (both Brussels) as part of the Fossils and Gardens project during September 2011.