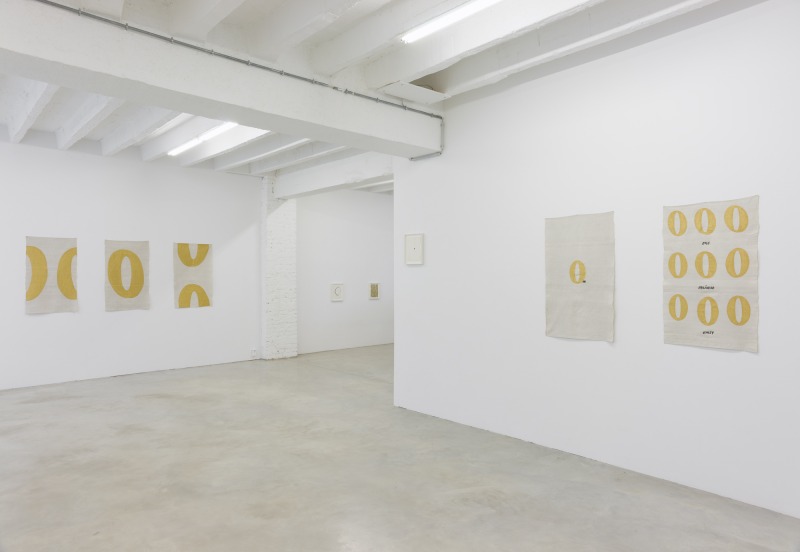 The show follows as a continuation of their ongoing interest in how modernity shapes our cultural and political reading of the present, (which the artists explored at Kronika Gallery in Orphans of Culture, Legends and Heroes, 2007, a show curated by Sebastian Cichocki). The inseparable connection of faith and the metaphysical, present in We are all in this alone (56. Venice Biennale, 2015) and Unspoken (Malmö Konstmuseum, 2015), also features in their most recent series Oneness (2015). Made of 11 panels with drawings made on hand-woven linen fabric, the work is based on a conceptual work with text by Ad Reinhardt and graphic design by Bridget Riley published in 1966 in Poor.Old.Tired.Horse No 18, a magazine for concrete poetry, edited by Ian Hamilton Finlay. We found simplicity in the text and metaphysics in the design and wanted to explore that further. This particular text by Ad Reinhardt can read as a concrete poem, it has a specific tone of urgency and corresponds very much with issues in our practice (e.g. institutional critique, contextualization of art production, personal politics). He says ‘There is one fine art, one museum of fine art, one art system” etc. and this singular, affirmative, ‘mantra-like’, intelligently critical and absurd statement is strangely reflective of the world we inherited and can be engaged (along with Riley’s drawing of zero’s) in continuum – a progression of both conceptual and aesthetical values. We have been interested in the use and history of linen as a material; this linen in particular, is of Eastern European origin from the turn of the last century, and was made for burial services of the wealthy. As a material that links narrative forms from the Past to the Present, the panels function as traditional surfaces where social practices of rituals are re-imagined. We collaborated in part with the Monastery of the Holy Mother of God, (village of Matka, Macedonia), in order to better understand the material. The technique for working with hand-woven linen and some of the techniques of embroidery are mostly done in isolation and solitude. This way, we are also trying to emphasize the dualities of the private and public, spoken and unspoken, written and vocal, that generate various forms of resistance in different cultures. (Hristina Ivanoska & Yane Calovski) The process of writing, the form of expressing ideas through words and letters and finally presenting the text as a visual work become very important in my recent artistic practice. This particular text focuses on the performativity of writing, on its history and on the need of expressing one’s own ideas only through writing. (Hristina Ivanoska) I am interested in the engagement with archives, in creating new documents and in using various drawing and writing techniques to achieve certain results. I analyze my connection to historical temporality, juxtaposing my writing with found sources, editing and processing information that seems accessible yet very private. I type, draw and sculpt out of my discoveries in the hope that they will engage the imagination of the viewer in ways that are not overly scripted. (Yane Calovski)