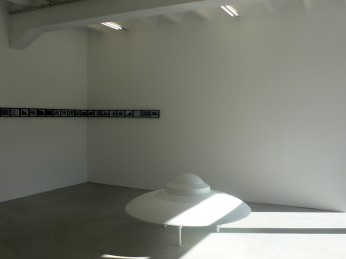 HaunebuThe project Haunebu reconstructs one of the most thrilling conspiracy theories of World War II: German engineers were to invent spaceships with the aim of winning the war for Hitler’s Germany. This safely guarded secret, the so called Wunderwaffe, was a flying saucer named Haunebu. Based on available documents, Hubert Czerepok strives, in as realistic way as possible, to represent the myth of an advanced German technology.
In Polish town Ludwikowice there is a building, from the time of the Second World War, which purpose is still unknown. One of the local theories states that it was used for the construction and testing of anti-gravity engines, needed for the spaceships, Haunebu and Vrill. If the Germans had finished these weapons in time, the fate of the world might have been different. It is said that towards the end of the war all prototypes of the spaceships were ready for mass production. At the end of 1945 they were supposedly evacuated to a German military base for submarines and ships in the Antarctic. Allegedly this part of the Antarctic had been occupied by the Germans since 1938 and was named Neu-Schwabenland.
Shortly after 1945, the American military supposedly sent troops on several missions, to the Antarctic (certainly not for the purpose of fighting penguins and seals).  It is said that Haunebu had been secured by the Americans in January 1947 during the operation High Jump. Several months afterwards information of a UFO crashing over Roswell, New Mexico ran through the U.S. media. If one proposes that the UFOs were the same German spaceship Haunebu, the whole story of a crashed over Roswell, starts to make sense. Especially since the military base at Roswell is the only base that housed bombers fit to transport atomic weapons and other highly secret projects. Seen from this perspective, it is also understandable why the American military continued to organise expeditions to the Antarctic, identified as operation Deepfreeze, until mid 1960s.
Hubert Czerepok refers to sources, which remain unsubstantiated and uses classical strategies of contemporary art: found footage and re-enactment to weave his story. He analyses the information found and strives to provide it with new meaning. Conspiracy theories appear repeatedly in his oeuvre. His work has already posed the existence of extraterrestrials, as well as explored secrets in the destruction of the WTC, apocalyptical theories and curses from the Middle Ages. He questions conventional interpretations, and infects history with a virus, weakening the traditional course of narration - it is his aim to construct ‘simulations of history’. His aim is not to contradict anyone or prove anything. He bluffs, he manipulates the viewer, and he wants to generate uncertainty. Just as one is never sure if what is commonly believed has in fact taken place, one must also question if what we think is absurd could only be fiction.