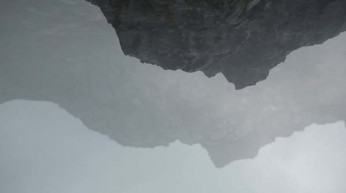 Opening: January 27, 2012, 6–9 pmŻAK | BRANICKA is delighted to present the second solo-exhibition Lux Aeterna in the gallery.The exhibition Lux Aeterna by Hubert Czerepok focuses on humanity’s dream of attaining omniscience. Czerepok is interested in the border between enlightenment and possession, between good and evil.
Lux Aeterna is also the title of Czerepok’s latest video, shot in Norway. His protagonist takes an inward journey and holds a complicated monologue with quotes from Romantic poetry and the writings of statesmen, madmen, and tyrants (Juliusz Slowacki, Thomas Jefferson, Anders Breivik, Adolf Hitler). The background to this monologue builds with breathtaking scenery of the country’s nature: mighty northern woods, rocks, and lakes. The film’s style and expression also draw from Nazi German cinematography (e.g. Leni Riefenstahl), in which nature inspires a longing to conquer the world.

Unexpectedly for the artist, the work on the video coincided with events on the Norwegian island of Utøya, where in July 2011 the right-wing extremist Anders Behring Breivik, convinced that he was benefiting the world’s future, murdered 77 people. It was later revealed that during the murder Breivik was listening to a loop of Clint Mansell’s work Lux Aeterna.

The media are the main source of Czerepok’s works. The artist examines daily news and scientific articles to catch the world in its contradictions, bluffs, or perplexities. He demonstrates the frailty of the human mind: he investigates the limits of knowledge, the imagination and logic, and also enjoys exploring the spheres of the irrational. He addresses the failure of the enlightenment in The Norm of Lost 50 Micrograms sculpture, drawing from the research of scientists who declared that over the past hundred years 50 micrograms have inexplicably vanished from the model kilogram stored at the International Bureau of Weights and Measures in Sèvres.

Lux Aeterna is an exhibition about the dream of taking control of matter and life, where the vanity of enlightenment is also madness. Madness is, according to Czerepok, like vertigo: it imperceptibly and definitively seduces, it is irreversible, which is why one of his works quotes the Joker from The Dark Knight: “Madness is like gravity. All it takes is a little push.”