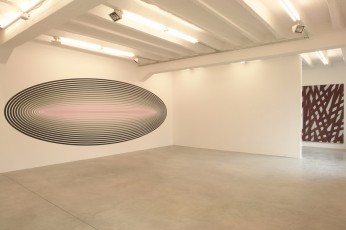 NO MATTER WHERE IT HAPPENS Opening: Friday, 05.09.2008, 6 - 9 pm
Exhibition: 06.09.2008 - 24.10.2008 Perhaps as a result of Jarosław Fliciński’s training in architecture and painting, the idea of imposing painting onto a space comes naturally to him. He began working with oil on canvas, but soon shifted from the canvas straight onto the walls.
My paintings slid suddenly from the canvas. It happened in the moment when the canvas’s frames became too narrow.
In order to view Fliciński’s works, one must initially consider space and motion. The paintings extend into a period of time. The artist chooses the precise composition for each space according to his assessment of the space’s conditions, for example what kind of light it receives. The mural becomes a landscape surrounding the spectator; it is spellbinding and even overwhelming. The spectator is placed in the eye of the storm. It is the scale, repetition of a simple geometric motif, and colour that create this sensation. The colour is especially important in Fliciński’s works - We feel it physically, as though it is a movement of air or a change in temperature. Fliciński says: The basis of my work is pure painting- my works are about seeing. The spectator takes pleasure in observing. After stepping out of the spectacle, the viewer’s ability to see and absorb is heightened. His geometrical murals, consisting of stripes or ellipses, build a bridge between the flat surface and three–dimensional space. The ellipse is the Judas of geometry and it is allies are seeing and perspective. Standing in front of the mural, one cannot trust his or her own eyes as the form begins to vibrate and move, drawing the viewer deeper into it. The ellipse’s ignoring of the traditional vertical and the horizontal edges of a painting is what makes the form so attractive and enticing to the viewer. We are lead to assume that this ellipse continues above and below, extending into infinity, and doesn’t concern itself with the edges of the ceiling or floor. These ruptures of traditional boundaries are what make Fliciński’s work as suitable for gothic cathedrals as it is for private homes. When I paint my walls in temporary spaces, I have already agreed to their future in-existence. Out of this, the themes of the ephemeral and the fragile appear, which seem to be inherently human. The more the paintings are specified to a space, the more we feel their disappearance. Actually, my murals are works about passing and despairing. In order not to inflict them with too many meanings, I like to topple them over with the title. “The Rest is up to you”, “Up, up, and away”, “As you Wish”, “Never Been Better”, “End of the Summer”, and “A Kiss is not Enough” are titles for his work that are connected with emotions, which are in turn connected with the places or moments in which he made a decision about the work. We absorb Fliciński’s paintings with our senses, which is why they last in our memory for so long. In the end, all of Fliciński’s work “No Matter Where it Happens”, manages both to trick the spectator’s eye and to seduce his soul.