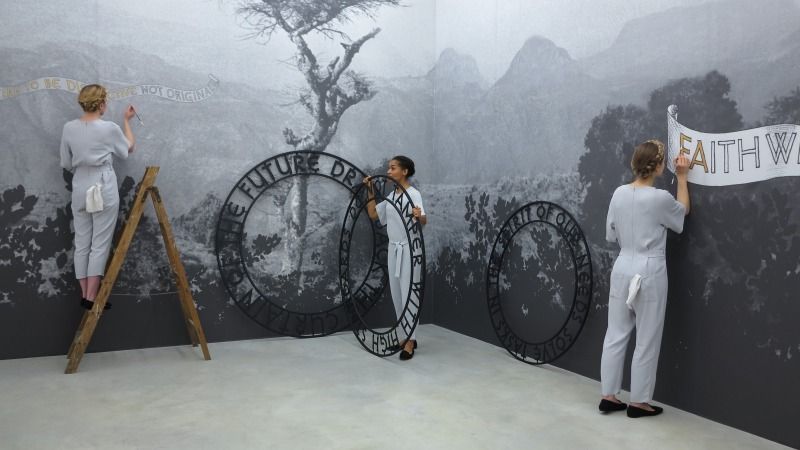 Firm Foundations
Opening: 20 January, 2017 from 6 to 9pm
Exhibition: 21 January – 08 April, 2017
ŻAK | BRANICKA is delighted to present Firm Foundations by Jasmina Cibic, this will be the artist’s first solo presentation in Berlin and the beginning of her cooperation with the gallery.
Cibic’s work seeks to establish dialogues between politically latent objects from diverse historical or linguistic and media spaces. Hers is a practice that addresses the ways in which visual language, art, architecture, and rhetoric are deployed and instrumentalised by political regimes, before investigating what happens to these fragments when the ideologies they endorse collapse.

Gathering together these symbols and iconographies, Cibic’s projects present a synthesis of gesture, stagecraft and re-enactment. Instantiated in films and installations, hers is also an ongoing performative practice, an ‘enacted’ exercise in the dissection of statecraft. Cibic plays a double-game, at once decoding mechanisms of power whilst building her own exemplary allegorical structures. Tracing lines through history, she undertakes detailed research of official state archives and hidden repositories of authority. The conventions, apologues and narratives she turns her forensic gaze upon are drawn from various players involved in the contrivances of power, working in concert to forge common visions of the nation.

Extending from the gallery window to cover almost half of the space’s walls is Cibic’s The Land In Which a Wide Space For National Progress Is Ensured, a performative installation that alludes to the soft power strategies of art and architecture utilized by (trans)national political structures. A wallpaper composed of numerous photographic elements seamlessly stitched together depicts a fictitious monochrome landscape strewn with banners. This picturesque utopia is an amalgam of images taken by Josip Broz Tito’s personal photographers in an attempt to frame the emerging postwar Yugoslavia — artists in the service of the state whose images are necessarily implicated in a political aim despite their circumstantial nature.

The banners casually caught in the branches of this fantastical landscape bear quotations from a variety of affirmative political speeches pertaining to nation building. During the exhibition’s opening these slogans will be activated during a performance in which two costumed women gild the text in continuo, siting this iteration of the work firmly in its locale. The display of the same wall image in different spaces indirectly provokes reconsiderations of the contextual uniqueness of a certain space and poses the question whether that uniqueness is lost or enriched each time it is recast and displayed.

Superimposed over this prospect are a series of closely associated works — collages in which geometric abstractions are cut into pastoral photographs to reveal other landscapes behind. These images are also sourced from Tito’s archive, whilst the incised forms are drawn from unrealized designs for the decoration of Belgrade for the inaugural conference of the Non-Aligned Movement in 1961. These ‘neoreadymades’ are purged of their original meaning and their identification. They are reduced to signifiers, which the artist utilises to build a new vocabulary that provokes a reconsideration of space and time, a clash of worlds — known and imaginary. These loaded abstractions extrapolate from the walls and are made concretely manifest on the floor in Assembly, a sculpture at once redolent of a minimalistic emptying of content, and diagrammatically suggestive of social organization.

Cibic’s video The Pavilion presents a group of five female performers who assemble the model of the modernist Yugoslav pavilion presented at the 1929 Barcelona EXPO from individual parts on a theatre stage. Shot from various angles and perspectives, the performance of building turns into visually seductive choreographic arabesques created by the performers in light-coloured overalls on the black floor of the stage. The action unfolds on an empty theatre stage and is accompanied by the voice of a female narrator who functions as the artist’s alter ego, adopting a documentary tone to describe the methodology and the process of reconstruction of
the disappeared pavilion. Focusing on the striped façade of the object, as an architectural concept which aims to seduce the viewer, Cibic analyses the implementation of this visual language outside the realm of architecture, presenting this part of her exploration through illustrations featuring objects that she used as a basis for the pavilion’s reconstruction. Nearby lean three heavy sculptural rings, reminiscent in both material and form of the architectural ironwork of institutional gates and fences. Each bears an aphoristic phrase from a different ideologue speaking on the subject of ideal architecture (Thatcher; Khrushchev; and Truman), whose words repeat in an endless cycle, fixed in this arcane form of production. Taken together, the works that make up Firm Foundations gesture towards the latent performative potential of props, backgrounds and scenographic elements drawn from the history of modern nation building. By turning the exhibition space into an expanded film or theatrical set, Cibic draws parallels between the construction of national culture and its use-value for political aims, embedding historical references and ready-mades as diverse as nationally representative aesthetics, architecture and cultural propaganda.