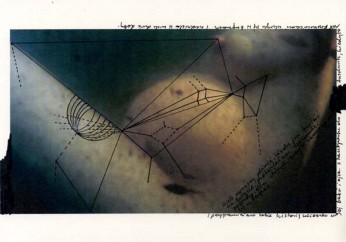 Joanna Rajkowska: Born in Berlin - A Letter to Rosa

Opening as part of Gallery Weekend Berlin 2012:
Friday, April 27, 2012, 6–9pm Opening times during Gallery Weekend Berlin: April 28 – 29, 2012, 11 am to 7 pm  Joanna Rajkowska possesses an unusual ability to transform private stories into public and political events. Her works make the existence of average people or trivial events visible within a social context. "Born in Berlin", her most recent project which took over a year to create, is composed of two parts. The first is a film of the same title, produced for the 7th Berlin Biennale of Contemporary Art and in cooperation with the ŻAK | BRANICKA FOUNDATION. It will be screened at the Akademie der Künste in Berlin during the biennale. The second part, on show at ŻAK | BRANICKA Gallery is titled "Born in Berlin – A Letter to Rosa", and consists of over 100 drawings and collages, forming a very intimate letter to the artist’s daughter. Rajkowska explains to Rosa: “You were supposed to be a gift to Berlin, to this city which usually only brought destruction, at least for my family. A gift which was supposed to disenchant everything.”
Rajkowska decided to give birth to her daughter in Berlin. She named her Rosa, after two women: Rajkowska’s great-grandmother, Róża Stern, as well as Rosa Luxemburg, the Polish revolutionary from Zamość, who spent most of her life in Berlin and was murdered there.
Rajkowska made a conscious decision to move to Berlin, a city which has always been the destination of thousands of emigrants. Her project has become a kind of reenactment of history, and the artist’s seemingly private act has acquired unusual symbolism. The emotional and administrative consequences of this decision will be felt by her daughter throughout her life: from now on, in the space for place of birth, Rosa will always write: ‘Berlin’. The city and its history will be a part of her life forever.

In her "Born in Berlin" project, Rajkowska shows her unborn child around the painful locations of Berlin and acquaints her with the wounds of the past. She confronts society’s hope for the future (a newborn baby) with the city’s history. Rajkowska hopes that, in this way, the future will forgive the past.

At the same time as "Born in Berlin", the Polish Institute in Berlin will display the "Sumpfstadt" project, and the 7th Berlin Biennale will present the project "Final Fantasies". Thus, Joanna Rajkowska will create a trilogy in Berlin that is dedicated to this city, as well as to life and death. Furthermore, ŻAK | BRANICKA FOUNDATION and the Polish Institute in Berlin plan to publish the catalogue "A Guide to Joanna Rajkowska".