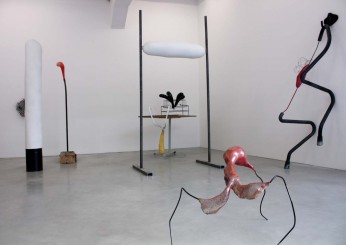 Gleaning the GlossOpening: 20.3.2009 6-9 pmŻAK | BRANICKA is pleased to present Kasia Fudakowski’s first solo show in Berlin, Gleaning the Gloss. The exhibition features 12 new sculptures. They are characters, objects and obstructions which transform the gallery into a great forest of delicious and sinuous forms that while invoking surrealist associations, at the same time recall abstractly figurative forms in the midst of identifiable gesture.
“…It is somewhere between these two poles – this abstract meander between character and form – that you can improvise a negotiation of ‘Gleaning the Gloss’. The gloss is the shine, the camp, the sex of it all. … It hints at a fugitive symbolism, reflects and deflects, is a physical and linguistic shiny second skin. And the glean is the assembling, the putting together, the story, the narrative.
The glean is the insane piling up of parts – like a Phillip Guston where you encounter limb upon limb knotted together in great bundles. It is the arena, the absorber, the social condenser, great emancipator and connector all at the same time. The glean is the dissembling, the fragments of circuitry, the patterns, shadows and game of visual dress-up with each element poised to deliver numerous punch lines. It is the wonder of the atomic, of bits made of bits, of suppositions and latent images. To ‘glean the gloss’ is an explicit invitation to unravel. …

The sculptures are not action figures, and like Teflon-coated Play Doh, we can pull and squish their meanings, but never fully penetrate the chain-mail of irony and humour. The agent provocateur – flabby and dubious – is a spindly transvestite, sloping upwards via hairy limbs to a ravenous midriff. The pearlescent blonde mash of collar is slick and sleazy, seedy and shuffling. At every turn, some wonderful foam expands on its own accord. Ups are negated by downs, and streaks of flesh and wild limbs offer themselves up gleaming and irresistible. Hints of the figurative rear up to be squashed by formal gestures and slapstick inferences. Sex is diffused everywhere – in the drips, the oozes, the uprights, the horizontals; in the wetness, the gloss, the pungent air of shame and the fun of being a pervert. There are objects, characters and obstructions, all bundled between the threat of grotesquery and comic potential.” Helen Marten   “This is how they grow. Colorless asparagus, a dark room, planted in rows. Caged and refused the chance to photosynthesize. From toothless white masses these asparagus melt and are leaked out, find themselves in bundles under the bridge, scattered in a just-damp riverbed. There they are harvested and taken to be packaged and distributed by the spider.
The first to receive his bundle is the knackered horse, shriveled and surrounded by buzzing gadflies. As they greet one another, the spider generously rids him of his pests, a pleasure for both, as the spider hasn’t much chance to feed before his early morning route. During his own travels, the horse was once seduced by a Magnificent Frigate to whom he lost his innocence and from whom he eventually cultivated a bulbous red balloon protrusion of his own, an opportunistic chameleon. Now he attempts to use his own globular goiter to lure in his old friend, though it’s unclear to both if it really is a matter of physical attraction or if the horse, in his old age and exhaustion, craves only a solution to his pest problem. ….” Roni Ginach