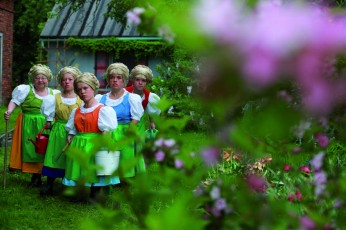 SUMMERTALEOpening: Friday, 31.10.2008, 6 - 9 pmExhibition: 01.11.2008 - 10.12.2008
Once upon a time in a land not too far away there was a beautiful little house in a wonderful flower garden, the birds were chirping, the bees and flies were buzzing. Midget women were hanging laundry out to dry, beating carpets, hoeing the vegetable garden, watering plants. It became dark and there in the moonlight suddenly three mushrooms started to grow…
Katarzyna Kozyra, recipient of Honorable Mention at the 1999 Venice Biennale for Men’s Bathhouse, presents Summertale, the final piece in the series, In Art Dreams Come True that consists of 13 videos: performances, quasi theatrical productions, and audience engaging happenings. Summertale presents a scenerie just as in a fairytale: midget women are working in an enchanted garden, when suddenly three mushrooms start to grow. They explode and produce three persons who have already appeared in the earlier films: Gloria Viagra, the Maestro and Kozyra herself. At first they are welcomed warm-heartedly but later on eyeballed with suspicion until finally their life is endangered…
The project In Art Dreams Come True started when Katarzyna Kozyra decided to spend her DAAD stipends learning operatic performance and make-up art, taking a definitive step in the direction of a new performance art. With the help of Gloria Viagra, a famous Berlin Drag Queen who Kozyra sees as the model of pure femininity, and the Maestro, a professional operatic vocal coach named Grzegorz Pitulej, Kozyra began a process and a work of art that demanded her to take on new feats both artistically and professionally. She entered into worlds saturated with artifice, conventions and posing. Kozyra’s interest here lay in the challenging of traditional boundaries between performer/artist and audience. She suggests that the responses elicited from the audience are as much a part of the piece as the artist and everything remaining under his/her control. Indeed, as Kozyra receives continuous instruction from Gloria and the Maestro during the performance itself, she is simultaneously bending and manipulating the role of the student. The development of flexible and shifting power dynamics both between teacher and student and performer/artist and audience is documented.

The project questions what it means to be a living star and those fundaments of femininity which allow a woman to exhibit herself, sing, dance, satisfy and succeed. Kozyra’s role as both Gloria’s and the Maestro’s doppelganger (double) and her transformations within the different filmic works—from knave, to operatic beauty, to punk-rock diva or Snow White—serves as the back drop for a work that brings into focus the influences a piece of art has upon its setting, its participants, and its audience.

Kozyra summarizes the entire her project with this confident statement: “Anyone can dance, sing, and act. And from my omnipotence comes a certainty that I will succeed at whatever I choose to focus on, because I’m potentially talented in every area”.