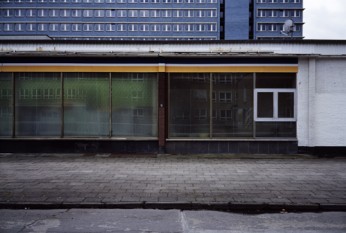 Briesen is the old German name for a provincial town situated in the north of Poland that was once a part of former eastern Prussia. The town's Polish name, W? brzeźno, is one difficult for the foreigner to pronounce. It is a grey and unremarkable place. It is where Krzysztof Zieliński was born and raised. Briesen is also the name of the artist's new photographic series.
In spite of the title, the series did not originate in W? brzeźno but in Berlin where the artist has lived for a number of years.  For him Berlin has become the same place of residence as the familial Briesen (W? brzeźno). In his photographs it is even hard to tell the difference between the two. Both towns are places that are non-specific, places that are easier to name than to describe – both with neglected gardens, carparks or disused and abandoned shop spaces. Similar and equally transparent, characterless and unspectacular spaces can be found all around the world. This is why these photographs could emerge both everywhere and nowhere, in Berlin or in Briesen. Zieliński's Berlin is a strange mixture of East and West, where the artist searches for his emigrant identity that has been lost somewhere between the two cities.

Each of Zieliński's series and the works therein have a connection to a specific place. In this series, the artist once again turns to his memories of the past and searches for the familial Briesen in Berlin.

The history of the Briesen series is furthermore intriguing from a chronological point of view; it is simultaneously both Zieliński's newest and oldest work. The first photos were taken in 1995 when the artist briefly lived in Berlin, but the idea to use the dispersed material as a whole only came 12 years later in 2007. The series is made up of nine separate parts – each comes from a different period, is created through a different technique and in a different size, and considers different aspects of the relationship between the artist and place. The main and most extensive body of work comprises colour photographs taken between 2006 and 2009. Selected parts of the Briesen series have already been exhibited at the Starmach Gallery in Cracow, the Centre of Contemporary Art in Torun, Gallery PF and the Zachęta National Gallery of Art in Warsaw. A selection of works from the latest period in this series will be exhibited at ŻAK | BRANICKA Gallery.