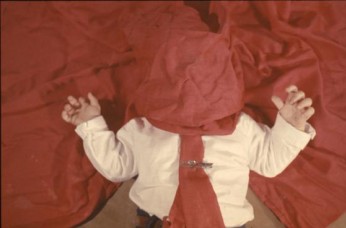 Activities with Dobromierz
The ŻAK | BRANICKA Gallery is proud to present Activities with Dobromierz (1972-74), a work by the artistic duet KwieKulik, one of the most important phenomena of the eastern European neo-avant-garde 1970s movement. Activities with Dobromierz has already had much international publicity including showings at Documenta XII in Kassel and the XI Biennale in Istanbul (2009).
After the birth of their son, Dobromierz, KwieKulik incorporated the child in their art activities for two years (1972- 74). “By combining parent’s responsibilities with artwork, we achieve the most variable compositions of our son with subjects of everyday utilities, containers, and surfaces – in situations that inquire our home or outdoor walks – all such compositions are captured on photo slides.”
KwieKulik developed an alternative form of artist’s work within the reality of Socialism. The Actions with Dobromierz, where the parents manipulate as if using a doll, have a strong political overtone (oppression of the authorities). They are the artists’ response to omnipresent manipulation and censorship as well as introducing the absurd to reality (even though the reality of Socialism was absurd enough). Simultaneously, the aim of Activities with Dobromierz was to create a visual equivalent of mathematical and logical operations, which Kwiek and Kulik were interested in at the time.
Art for KwieKulik was the extension of everyday activity. Similar to other art duets of this era such as Abramovic/Ulay (1976-89) or Gilbert&George (from 1968), KwieKulik worked on the boundaries of private life, performance and body art.