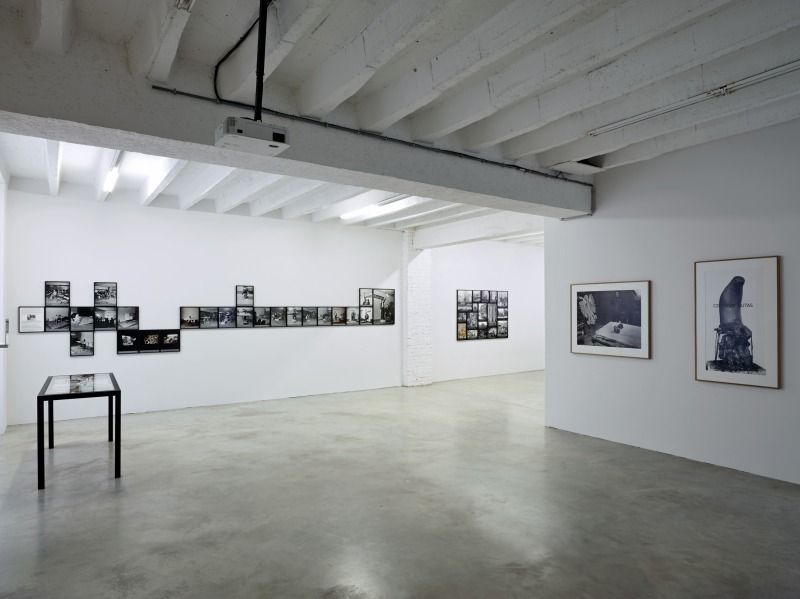 The Monument Without a Passport
Opening: Friday, 29 September 2016, from 6 to 9pm
Exhibition: 28 April – 30 July, 2016
Book Promotion: Friday, Apr 29, 2016 at 5pm in the gallery KWIEKULIK, edited by Łukasz Ronduda and Georg Schöllhammer will be presented at ŻAK | BRANICKA by curator and writer Timothy Persons. A conversation between Zofia Kulik and Timothy Persons will ensue.
Film Screening:     KWIEKULIK – documentary by A. Zakrzewska and J. Turowicz (2011) and videos by KwieKulik
Apr 27 – Apr 30, 4pm at cinema fsk, Segitzdamm 2, 10969 Berlin
ŻAK | BRANICKA is proud to present, in the frame of Gallery Weekend Berlin 2016, a solo exhibition by the artist duo KwieKulik (Przemysław Kwiek, Zofia Kulik), titled The Monument Without a Passport.
The artworks presented will focus on criticism of state opression. The main topic is Freedom: both personal and social, but also freedom to travel and of thought. The show is born out of a reaction to current political issues haunting Europe, in particular the issue of censorship. The artworks to be shown, made during the 1970s are as timeless as they are actual, showing us just exactly how easily history repeats itself.
The duo KwieKulik existed between 1971 and 1987 and became one of the most important art phenomena from the other side of the Iron Curtain. Over its 16-year span, they organized many performances, artist demonstrations and created many objects, videos and photographs. KwieKulik’s social and political activities, together with their uncompromising and brave criticism granted their oeuvre an extraordinary position in the avant-garde movements. The political nature of their artworks was, since the beginning, a reaction to the exclusion they experienced from the ruling regime. By refusing to resort to traditional means of expression, their methods were pioneering in the context of their time. For them, performance and the documentation of their works was also an extremely important part of artistic activity. Their postulate was to erase the borders between private life and art, with the statement: "The Personal is Political”.
One of their earliest works is the series Ameryka (1972-1985). Originally, Ameryka was the name of a magazine  published in Polish by the US Information Agency in Washington and distributed in Poland by the American Embassy. The magazine promoted an ideal lifestyle in the U.S. where only happy people lived. Browsing through the magazine, KwieKulik were struck by the images of smiling people, with whom they could not identify with, standing in the Socialist reality of their lives. As such, they wanted to create their own reality inspired by the American dream. Their photographs show them as happy parents who travel the world and who have succeed in their career. Ameryka unmasks the language of propaganda by deforming it.
The title of this exhibition is given by a performance the artists made at the Biennale of Young Art in Sopot in 1978. It was meant as a counteraction for having their passports revoked by the Polish Government, preventing them from traveling to an interdisciplinary workshop in Arnheim (The Netherlands), in that same year. The reasons behind this revocation were two photographs in the catalogue from the exhibition centre Malmö in Stockholm. In one, Zofia Kulik is shown in her studio working on a sandstone memorial tablet. In the background, a large plaster eagle – the emblem of the People’s Republic of Poland – made by another artist leans against the wall. The inscription in the photo was: A Bird of Plaster for Bronze in the Barracks of Fine Arts. In the second photograph, a clay nude, made by Przemysław Kwiek, is entitled Man-Dick. The composition of these two pictures caused the so-called "Eagle affair” where the Polish government accused the artists of having performed actions in Sweden that profaned the patriotic eagle. Thus, KwieKulik lost any financial help from the government and were banned from representing Polish art abroad for the next couple of years. The Monument Without a Passport became a memorial for bureaucratic aggression. Without the ability to travel, KwieKulik asked the organizers in Arnheim to make a performance based on their instructions in which Joseph Beuys participated. Both these historical photographs will be shown at the gallery.
Shortly before Martial law was introduced in Poland in 1981 they participated in the exhibition New Artwork from Poland at the Künstlerhaus Stuttgart for which they produced the video performance Supermarket. Throughout the video, the artists stroll around a supermarket (full of ‘foreign’ goods) and are overwhelmed by all the abundance surrounding them, they can’t decide what to pick and end up leaving the shop without buying anything. The abstruse situation in the film points out the contrast between the reality of where KwieKulik live and a utopia where dreams come true.
Years later, they went on a Trip Around Europe, the second video to be shown. The two artists travelled in a small Fiat 126p around Germany and Belgium carrying with them a tent, sleeping bags, a camping stove, their camera and even some artworks. During their journey, KwieKulik realised and documented several projects and met up with artist friends such as Joseph Beuys and Elisabeth Jappe.

ŻAK | BRANICKA will host a daily screening of the documentary KWIEKULIK, directed by A. Zakrzewska and J. Turowicz as well as some videos of KwieKulik at the nearby cinema fsk.