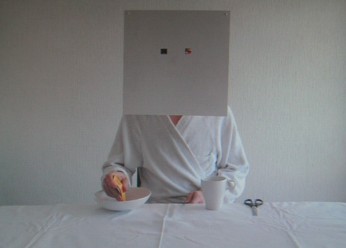 Video Point | White video Opening: February 6th 2009, 6-9 p.m. Jastrubczak is a young multimedia artist who examines the fields of invisibility, disappearance, ephemeral revelation and lunacy. At the same time as his work is absurd and amusing, it is also deliberate and somber. In White Film, we see Jastrubczak sitting in a white bathrobe with a white square suspended to cover his face (with eyeholes, also square). He is tapping out a beat. Jastrubczak presses an unidentified buzzer into the bottom of an empty white bowl on the table in front of him and taps the table, a white mug, and a pair of scissors with the back of a spoon. In the short video, Jastrubzcak renders himself neutral by shielding his identity and nullifies himself in white. He becomes another white object, like the mug or the table, performing an action and only fulfilling his duty: a white robot.

Jastrubczak’s interest in the reforming and disappearance of character, especially his own, is a recurrent them in his video work: he makes costumes and masks, recreates classic films in his own sets removing the characters, and even sometimes works (supposedly in collaboration with himself) under a pseudonym. Jastrubczak takes on these activities essentially as temporal and contextual experiments where disappearance, the significance of presence and its incontrovertible transience are both the catalysts and the findings.