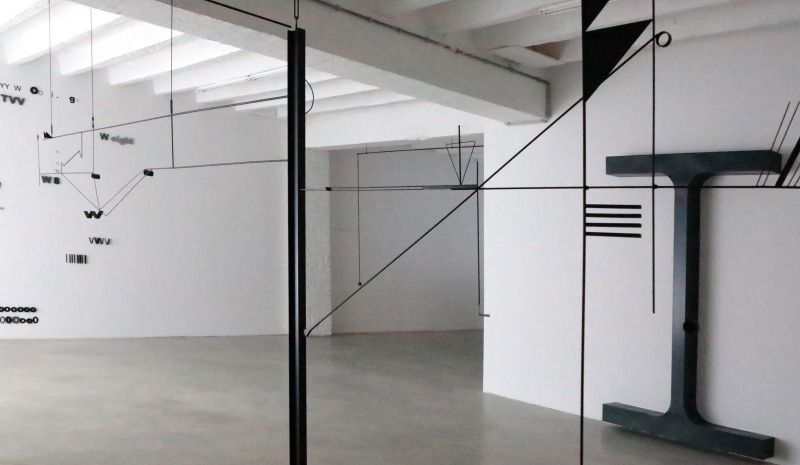 Marlena Kudlicka | the weight of 8

You are cordially invited to the exhibition opening on Friday, June 21, 2013 from 6 to 9 pm. ŻAK | BRANICKA Gallery is pleased to present the weight of 8, our first exhibition of Marlena Kudlicka's work.  Specially prepared for the gallery space, the artist has created an installation consisting of three objects along with a narrative, the key to which is the title of the exhibit. The weight of 8 is a description of the relationship between space and language. The artist says that "Letters and words serve to describe a space, while numbers do the same for its measurements.  Words are not, however, capable of precisely expressing something, as they constitute a subjective evaluation, yet numbers code precision.  I join both forms in a new language."
The first component of the weight of 8 is an installation constructed of metal letters and numbers. It looks like a piece of DIN A4 paper that has been proportionally enlarged to fit the height of the display space, but, due to a coding error, all of the characters have been garbled, creating an abstract visual composition. The second component is a hanging sculpture that was created based on the exact measurements of the dimensions of the gallery. It is a kind of abstract "algorithm" that visualizes mathematical operations, without describing them with characters or numbers. The sculpture is made of metal elements of varying thickness and is based on the principle of counterpoint: the weight of some elements is distributed to the exterior with the help of other elements.  The steel object that connects the first two components has two meanings. The first comes from mathematics (statistical calculations), as the object has the shape of an enlarged I-beam, the load bearing construction element that was introduced into architecture by Mies van der Rohe. The second meaning comes from language: the cross section of the object is simply a large letter "I" and it carries specific semantic meanings: in Polish it means "and"; in English "I"; and it is also the Roman numeral 1.

All of the pieces of the installation are based on the relationship between letters, numbers, and punctuation, as well as matter and its weight. Everything is important here, including the thickness and type of materials, and the finish.  Even the color is derived from mathematical calculations. So, what does the "eight" in the title weigh (estimated visually), and what is its color? In order to calculate them, it is enough to read the title-equation out loud: the letter "w" is present in the first word, but not the second. A proportion of 50% black to 50% white gives us the gray.

Kudlicka is particularly interested in the relationship between precision and error: her sculptures are made with a jeweler's precision, but at the same time an error is factored into the process of their creation. This relationship leads to a balance—the main theme of the exhibition—not only between, for example, numbers and the written word, or dimensions and color, but also the balance of weights. Her sculptures are based on statistical calculations, which is why they seem to float on air, and why we doubt the force of gravity when looking at them, or walk around them on tiptoes.

Kudlicka's work follows in the tradition of constructivist art. Just as Katarzyna Kobro, the forerunner of Polish avant-garde art, she also derives her sculptures from architecture. Kudlicka says that "In this project I refer to the peripheral areas of architecture, as well as to the construction process. My inspiration was a trip to Beirut and the suburbs of Cairo, but also the 1970s in my native Poland, where, in a situation of constant systemic political change, temporariness and a lack of stability were a permanent part of architecture. Most often this was a result of improvisation and limited access to building materials; so this whole temporary architecture became a 'monument of errors.' In illegally erected buildings, construction elements that leaned on each other were balanced in accordance with the principle of counterpoint. Of course this was all inevitably predestined to be fragile, and this interested me the most.  In what way does fragility activate a space? Does it play a primary or secondary role? Why are certain places felt to be weak points, or can fragility, perhaps, be seen as a temporary state between instability and scarcity on the one hand, and effectiveness and function on the other?"

Language is also a key element in Kudlicka's work; the title is always an integral part of her art. Friedrich Meschede writes that "Focusing on the title reveals a crucial core of Marlena Kudlicka’s work.  She refers to concrete poetry, a term that can be ascribed to both literature and the fine arts, which transforms the flowing transitions between the medium of language, its visualization using letters as a pictorial form, and sounds as concepts of rhythm into a complex system. The rigid guidelines of grammar turn into a new order through a playful disregard of grammatical regularity. The combinatorics of opposites, and elements that would not initially be thought of as going together, is the technique of collage used for concrete poetry. The vocabulary of construction creates the surprise."