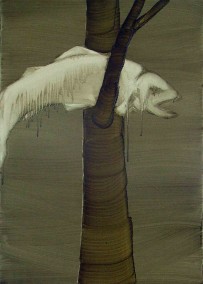 FAT TROUT
The exhibition´s title FAT TROUT refers to the name of a trailer park in the film Twin Peaks- Fire walk with me by David Lynch, a location, where detectives searched for clues concerning the murder of Teresa Banks. In the film a fat trout was depicted on the welcome board of this mysterious and frightening location. This motive, in combination with the dark atmosphere of David Lynch’s film, provided the motivation for Jankowski’s further explorations.
In Fat Trout Jankowski explores the topic of cruelty that he has already taken up with his Frogs-series, in which the frogs are pumped up with air in a children´s game. His current works are predominantly presentations of animals on a 1:1 scale and are strongly simplified. Cats, foxes, fish, cows and birds emerge from these monochrome backgrounds. They all appear motionless, and perhaps that is what makes it so disquieting. They seem to sense danger, such as an impending fire, paralysed, yet ready - as if led by instinct - to run away in a split second. However, these animals appear calm, motionless and frozen in time. The inherent violence in his painting is not obvious; it is lurking in the background and doesn´t show its true face at first sight. The paintings display neither blood nor violence, but appear to be taking stock of dark potentials. The fight is over, the culprit not to be seen.
The weird presentations of animals allow us to evoke the graphic works of Pieter Brueghel, Hieronymus Bosch or Francisco Goya, with their frequently drastic displays. The character behind a mask is actually a bee-keeper, first seen in one of the works of Brueghel. The same goes for the Kindling-series that also refers to motives originally developed by Brueghel that Jankowski has developed further. In the dark, monochromatic colour palette the influence of the old masters is also recognisable. At the same time Michał Jankowski is an author of presentations born from large gestures with thin paint. He paints quickly and fiercely, yet very precisely. Realistically looking animal furs are nothing else but a couple of strokes of the brush. This brush would be more suitable for painting of walls.
As with Lynch, Jankowski´s mysteries cannot be fully solved. Jankowski reminds us, that (…)In a town like twin peaks no one is innocent**. The disquieting feeling of threat or anxiety that creeps up while looking at Michał Jankowski’s paintings presents a paradox as these feelings spring from human actions.