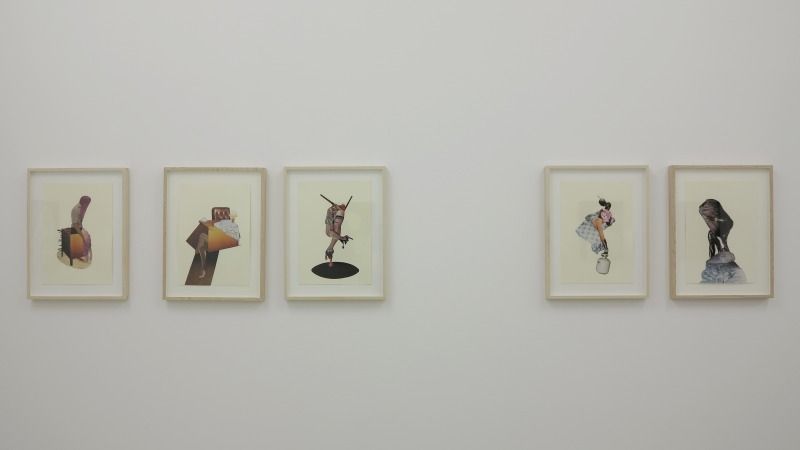 ŻAK | BRANICKA is pleased to present an exhibition of new works by Michal Jankowski under the title Good Night. The exhibition will take place in the gallery's showroom.Michał Jankowski takes the viewer on a phantasmagorical journey to a world in which subconscious thoughts are brought to the surface and left uncensored. In their morbidity, ambiguity and incredible tactility, the artistʼs works evoke a series of sensations when viewed over a period of time. Jankowski pushes his subjects to the limits of their legibility as images, whilst at the same time building bridges to entirely new worlds of interpretation; each uniquely constructed for, and essentially by, every new observer.
The exhibition Good Night showcases a selection of Jankowskiʼs most recent works, which in contrast to his previous series of paintings, consists exclusively of collage pieces. The artistʼs personal memories, declinations of eventualities, literary allusions and private tragedies are all grafted onto a dictionary of visual references. The use of collage is key in enabling Jankowski to transform ordinary subject matter into almost abstract representations; bodies are segmented and imaginatively reassembled into unnatural and often unnerving hybrid creations, deprived of their former individual qualities. In the words of the philosopher Jean-Luc Nancy: Bodies, in the end, are also that – head and tail: the very discreteness of the sites of sense, of the moments of an organism, of the elements of matter. The body is a place that opens, displaces and spaces phallus and cep hale: making room for them to create an event (rejoicing, suffering, thinking, being born, dying, sexing, laughing, sneezing, trembling, weeping, forgetting…).1
The influence of the Old Masters, although more apparent in Jankowskiʼs earlier paintings, is still identifiable in the subject matter and form of Jankowskiʼs collage compositions. More significant in Good Night, however, are the references made to Surrealist artworks and ideas; these are expressed in the unnatural combinations of elements found in Stroke (2012) and Cream Pie (2012), for example, as well as in the allusions made to dreams – a recurring theme of the exhibition. The Pyjama works (2014), with their irrational juxtaposition of sinister belt restraints and childish patterns, can be understood as an expression of the unconscious, involuntary and unfiltered, as in a dream.
Whilst on the one hand Jankowskiʼs incongruous imagery evokes Surrealismʼs bizarre narratives, his works simultaneously subtly question modernismʼs tendency toward abstraction. The end result is a "contemporary surrealism”, which challenges our reliance on language and its attendant need for reasoned apprehension. With his collage figures, Jankowski recomposes his own "physiology” of the world, before or after any attempt at verbalisation. It is a stopping, a deviating of the descent of the discourse by tearing the signs away from their denotative value. What they now say is precisely the intermediate, the uncertain and the unnamable. They speak a constantly extended secret that prevents the subject from fulfilling its destiny by merging with a predicate.
1 Jean-Luc Nancy, Corpus, translated into English by Richard Rand, Fordham University Press: New York, US, 2008.