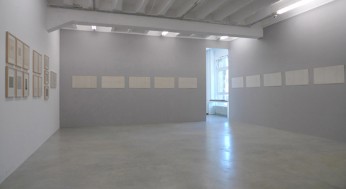 STANISŁAW DRÓŻDŻ | CARL ANDRE | ROBERT BARRY The exhibition at Gallery ŻAK | BRANICKA displays for the first time the work of Polish Concrete Poetry artist Stanisław Dróżdż, alongside the classic minimal and conceptual work of Carl Andre and Robert Barry.
This exhibition brings together Dróżdż’s most important original works from the 1960s – including Forgetting, Uncertainty-Hesitation-Certainty (1967), Duration (1968), Life-Death (1969), Loneliness (1967), Algebra of Prepositions (1987), Permutations (1989) – and one of his key numeric works Untitled (Numerical Texts). The slide projection from 1971 by Robert Barry, as well as the textual works of Carl Andre from the 60s and 70s, posits Dróżdż’s work in the greater context of art from that period. What the works of these artists connects is the analysis of words and their relation to space. These works are at the same time text and image existing at once on a flat layer and in space.
The exhibition title MINIMUM MAXIMUM is a quotation from Dróżdż’s work entitled Optimum from 1967. Both words are written in capitals creating a graphic arrangement in which the two opposing meanings MINIMUM and  MAXIMUM almost imperceptibly merge into one another. MINIMUM MAXIMUM is also a classic “coincidentia oppositorum“ – a unification of opposites. The opposition of meanings is explored in the works shown in this exhibition on a number of layers – such as image and word, content and form, materiality and virtuality, surface and space, black and white, in the binary system as well as in the philosophical division of good and evil.
The basis of Stanisław Dróżdż’s works are always short texts or words. These evolve into images and are put into a new context by destroying their semantic meanings through a specific connection or arrangement on a flat layer or in space. In 1967 still unaware of the existence of Concrete Poetry, Dróżdż started writing a type of poetry, for which he came up with the name Concept Shapes and whose form reflected its content. Dróżdż thought of himself as a poet, although he wanted to materialise words through which the practice of viewing became a process of actually understanding words. Even then Dróżdż was interested in the connection between words and space. In his most famous work Untitled (in-between) (Foksal Gallery, 1977) the word is written into the space of the gallery.
Carl Andre and Robert Barry studied the spatial relations of words early on in their careers as well. Since the 1970s Robert Barry has created slide projections with individual words, photography and text fragments, in which he works with language as a medium. From his earliest work up to those word-spaces that are well known today, he searches for spatial experiences and dimensions. Zdenek Felix accentuated in the foreword of the exhibition Robert Barry at the Folkwang Museum (1978) what this kind of art demands of the viewer. It “… reduces the visual information to a minimum and challenges the imagination and the emotional, intellectual and last but not least, aesthetic range of the viewer to its maximum.  Barry’s works – slide projections, prints, books, drawings etc – circle more than one rational or theoretical complexes without ever defining them …“ Carl Andre on the other hand, in poetry written from the 1960s either by hand or typewriter, treated words (notation, shape and sound) in a similar way to sculpture.
The exhibition comprehends the numerical and wording works of Stanisław Dróżdż, in which the artist tests the principles according to which both of these systems function (language or mathematics) and tries to list all possible combinations. Language is for him a system of sets where he runs through all possible operations. This is very well shown in his work Algebra of Prepositions which is a geometric illustration of possible combinations of prepositions.  The similar work Permutations is a record of all the letter combinations in the word PERMUTATION. His search for “combinatoric rules“ led Dróżdż to the work “Alea Iacta Est“, which was exhibited in the Polish pavilion on the Venice Biennale in 2003, and in which the walls of the pavilion were covered with all 46,656 possible combinations of 6 playing dice.
Stanisław Dróżdż (1939-2009) was the most famous creator of Polish Concrete Poetry. In 1968 he debuted in the no longer extant gallery “Pod Mona Lis? “ in Wrocław, and from 1971 on he worked continuously with Foksal Gallery in Warsaw. In 1979 he published the book “Concrete poetry. Selected Polish texts and documentation from the years 1967-77“. He was in constant contact with protagonists of Concrete Poetry from around the world such as Ian Hamilton Finlay, Eugen Gomringer and Vaclav Havel. In 2003 he represented Poland at the 50th Venice Biennale.