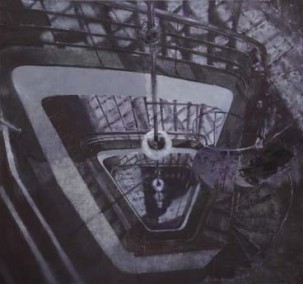 Poelzig VS. PoelzigOpening: April 30, 2010, 4-8pm
GALLERY WEEKEND BERLIN As part of Gallery Weekend, gallery ŻAK | BRANICKA takes great pleasure in presenting Paweł Ksi? żek’s Poelzig VS. Poelzig. This is the second exhibition of the artist’s work, following Silent Utopia at Art Basel Statements 2009, and is based on ideas connecting cinema produced during the inter war years and modernist architecture.
PawełKsi? żek is one of the most interesting contemporary Polish painters. His interests lie in the roots of modernism. On the basis of archival photographs and film, Ksi? żek finds common motifs for seemingly disparate themes, which he in turn connects in a collage-like-way on canvas. The starting point for his newest project Poelzig VS. Poelzig, is the horror film Black Cat (1934) directed by Edgar Ulmer, and the personality of one of Germany’s famous architects – Hans Poelzig. The inspiration for the project is the similarity in Hans Poelzig’s name and that of the central character of the film Black Cat – the Austrian Hjjalmar Poelzig – played by the brilliant actor Boris Karloff. The film takes place in a modernist villa, the contemporary façade of which hides the owner’s dark secret and sexual obsession. He celebrates occult rituals and in the basement he hides a collection of beautiful women‘s bodies that appear to float in glass coffins. The analogy between the two names is no coincidence. The director and the architect knew each other. Poelzig created the set design for Ulmer’s former film The Golem: How He Came into the World and Ulmer named the diabolic architect in Black Cat after Hans Poelzig in return. According to Hans Poelzig’s biographers, the architect himself wanted to be recognised at times as a demonic character: „Within me live many spirits and devils, if that is what people wish to call them. Only the hatred of God is creative and calls forth something new in people” he writes in a letter to his wife Marlene Moeschke. The onscreen relationship between Hjalamar Poelzig and Dr. Vitus Werdegast (the psychiatrist suffering from a phobia of cats, played by Béla Lugosi) reminds one of the relationship between Faust and Mefistofeles. One can consequently assume that the fictive relationships between the central protagonists are an echo of his personal relationships with Hans Poelzig and the director Edgar Ulmer.Architecture plays a key role in Ksi? żek’s paintings and photography; it connects two worlds – the fictive (film) and the real – together. In the space of Hans Poelzig’s most famous realisations, he writes in the protagonists of the film: on one photograph of the stairwell of the Haus des Rundfunks in Berlin (designed by Hans Poelzig) he replaces the stairwell with those stairs that lead to Hjalmar Poelzig’s basement. In another, Hjalamar Poelzig’s room connects with the foyer of the Capitol cinema in Berlin. In the series of photographs shown in the exhibition, Ksi? żek also manipulates details: in the film still we are shown a door, however the artist replaces the door handle with one from the Haus des Rundfunks. On the walls of Hjalmar Poelzig’s bedroom, he places the genuine architectural sketches of Hans Poelzig. This is not the first time that Hans Poelzig appears in Paweł Ksi? żek’s work. In last year’s exhibition of Silent Utopia in Poznan, Ksi? żek’s work was presented with the utopian architectural sketches of Poelzig. The way in which the artist works is reminiscent of the domino effect; those ramifications found in one project also appear in the next. Ksi? żek is also interested in the gothic aesthetic explored in his previous series De Stijl vs. Black Metal. Here the artist combines elements of modernism with the aesthetic of black metal. Based on reality and film fiction, Ksi? żek builds a hypothetical vision of an alternative world that considers the extent to which the architecture of the twentieth century merges with mass culture and to what level it is embodied in society. Equally significant is that Paweł Ksi? żek is first and foremost a painter that has worked up his own highly recognisable style and the project Poelzig VS. Poelzig is the inspiration for his paintings. A painting is for him the final element of a complex multi level search. The whole process of testing and selecting motifs and pursuing „material evidence” on the basis of historical links is nothing less than a pretext for painterly development and a good painting.