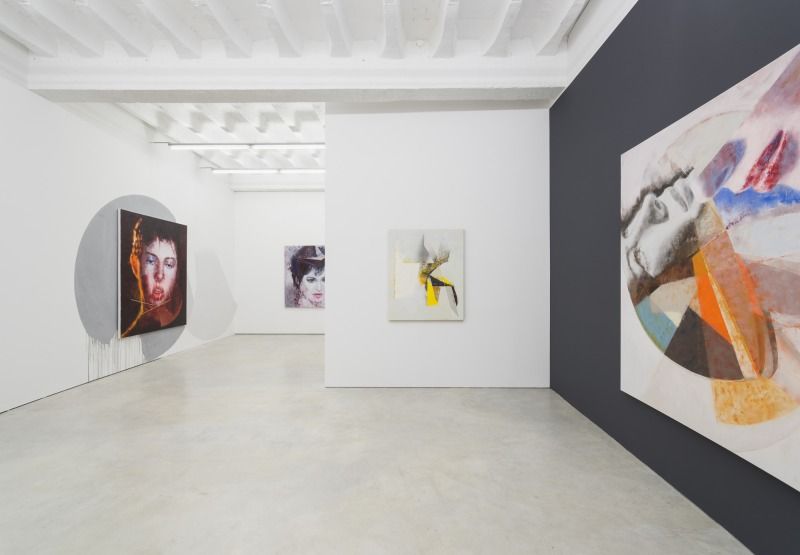 Parallels
Opening: Friday, 16 February, 2018, from 6 to 9 pm
Exhibition: 17 February – 21 April, 2018
ŻAK | BRANICKA is delighted to present the exhibition Parallels, the new solo show of Paweł Książek at the gallery.
In Parallels, Paweł Książek develops his paths of investigation into analytical studies on avant-garde aesthetics and researches the mutual relations between the human body and objects in space, nature and culture, construction and destruction. Taking the work of Lygia Clark and her famed 1960s sculpture series Bichos (Creatures) as his point of departure, the artist focuses our attention on the ties between the process of creating art and the emergence of various phenomena in the natural world. In this way, he supplements and develops issues signaled in previous works of painting, Sculptures (2012-2015) and Figures (2013-2015). In both these series the painterly apprehension of objects and body parts, portraits of women and mannequins, showed an alternate world verging on reality and the fiction of film, in which objects acquire a peculiar physicality, and human figures gain sculptural qualities. The corporal/sculptural and figurative/abstract hybrids in Parallels are the titular juxtaposition of corporal objects, and phenomena with analogous properties. Parallels is a synthesis and montage, a parallel narrative and play on the depicted structure and the abstract. This is essentially progress and evolution in the artist’s explorations, involving a dual transformation: the object into a subject and the subject into an object. And much as the point of departure for earlier series was the historical avant-garde, in this latest series the foundation is the Brazilian modernist experiments of the 1960s, the evolution of historical avant-garde aesthetics.

The work of Lygia Clark is often seen as an extension of avant-garde approaches to sculpture. As early as the 1930s, the Polish artist Katarzyna Kobro was calling attention to the limitless interconnection between sculpture and space or rhythm, as a spacetime phenomenon, thus stressing the role of the work of art in building progressive forms of social organization. Although it is hard to say how far Clark might have known Kobro’s work, in the Bichos series of 1960 we find a distant echo of the latter’s ideas, and their clear development. In this series the Brazilian artist gave her work a powerful social slant through the tangible inclusion of the viewer’s body in the process of creating the sculpted work. Her experiments led to therapeutic seances centered on physicality. As such, Bichos invited the viewer to manipulate and create various structures from movable hinged constructions. The various pieces in this series recalled both the Constructivists’ sculptures and a kind of origami, involving constant metamorphoses. These transformations freed them of all control, emancipated them; they gained subjecthood and took on the attributes of living bodies. Clark was clearly convinced that passivity between man and natural creatures (animals) was impossible. The same went for her own creatures – the Bichos.

In Parallels, exploring the neo-avant-garde realms of Clark’s artwork as a phenomenon of instability, Paweł Książek gave the various non-figurative sculptural constructs of Bichos their physicality. In conducting his own research on the work of the Brazilian artist, he treated her Creatures as spacetime phenomena inextricably tied to a rhythm also found in both culture (acting and dance) and nature (comets and lightning). Clark thus linked sculpture to unpredictable phenomena, adopting the role of the viewer, whom she invited to manipulate her works. Książek, in turn, gave the static sculptures motion and life, not in a limitless, three-dimensional space, but in the closed frame of a canvas. For this he borrowed the avant-garde strategy of montage, joining objects and natural phenomena into an organic whole, geometrical abstract forms and women’s portraits in a painterly synthesis. This strategy plays a clear role in Paweł Książek’s work, as the artist apprehends conceptual issues in painting in a highly individual way. These in-depth issues and intellectual narratives exploring the medium of painting are surely distinct and unique in contemporary art. In Parallels the artist ultimately plays a simultaneous game with representation and the abstract, but also in recognizing the capabilities of figurative painting in an extended field of sculpture, signalizing the interaction between the instability of particular pieces, in this case Bichos, and the stability of a painting and the finished picture.

Paweł Książek’s strategy in Parallels, involving the connection of two remote phenomena into a subject-object relationship, was based less on Clark’s work than on the principles of playing with images developed in interwar-era photomontages. However convinced the Brazilian artist was of the corporeality of sculptures, the photomontage invented by the Dadaists was the first to change how we looked at the human body as a concrete whole, substituting it with an invented conglomerate of human, nature and strange parts. The generation of odd bodies from assorted fragments of other bodies, objects, sculptures, machines, or the natural world prefigured Donna Haraway’s later examinations of the cyborg in the 1980s. These Dadaist hybrid body constructions first pointed to its unstable identity from a wide perspective, in the correlation between man, animal, machine, and other environments. Departing from Clark’s neo-avant-garde work and the evolution of the avant-garde, Paweł Książek has created aestheticized hybrids, sensual cyborgs, transcending biologically imposed norms. Yet the portraits of sensual film actresses like Lea Seydoux and Veronica Lake paired with Clark’s sculptural constructions and transferred to painting undoubtedly acquire an aspect more aesthetic than the social/activist cyborg figures of the Dadaists and Donna Haraway.

In terms of his own aesthetics, Paweł Książek explores the concept of physical and sculptural beauty through his medium of choice: painting. He consciously uses loud colors associated with Latin American modernism. The broad palette in Parallels also reminds us of the unusual designs of Mexican architect Luis Barragan, whose bright colors Książek had used in an earlier series, Constructions (2016-17), joining the utopias of German Expressionist cinema and the works of Latin American modernist architecture. Parallels, then, turns out to be a synthesis and extension of many of the artist’s previous series, through which he consistently explores the overriding problem of the perception of the world, utopias, and the ties between disparate phenomena. It is in this most recent series that he most clearly focuses our attention on the evolution of avant-garde practices and strategies, and on their basis examines the perception of unstable phenomena, whether unrestricted or hemmed in by the frame of a canvas.