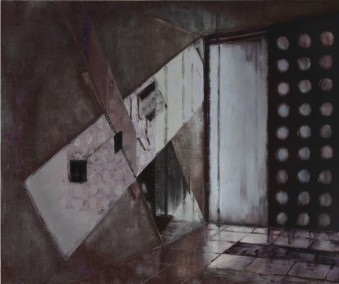 Paweł Ksi? żek’s project Silent Utopia is a speculative fantasy regarding the infiltrations and connections between Eastern European modernism in architecture and German silent film of the 1920’s. The Art Basel Statements presentation focuses on Metropolis, the 1925 film by director and architect, Fritz Lang, and the implementations of such prominent architects of the period.

Fritz Lang’s film conceives of an architectural future directly inspired by the Manhattan skyline.  “I saw a street that by means of neon lights was lit as brightly as if it were day. (...) This impression gave me my first idea of a city of the future. The skyscrapers functioned as an opulent theatre-set hung to dazzle, dispel, and hypnotize from a dismal sky.”  Fritz Lang’s vision that materialized in Metropolis was unfortunately never accepted by the public. Architecture, though, surfaced as an astonishingly resilient tool for constructing a vision of the future, both in science fiction film and in reality. The architects of the 20’s and 30’s were as well dreaming of an idealized person, society and city. Although both visions – the fantastical future projections of the film of the period and the grandiose idealism visible in the architecture– awakened ambitious promises, they were quickly met with public repulsion and dismissed, becoming a silent utopia of broken dreams.

Paweł Ksi? żek examines the connections between this architecture and the film and based on these connections, he proposes a hypothetical analogy for the existence of a sensibility common to that era of creators and thinkers. Upon examining both aesthetics, he wonders whether there were visual markers that could have been prognostic of the impending catastrophe.  Ksi? żek speculates about how a film could look, and how its content would be altered or maintained, when Czech, Hungarian or Polish architecture replaces the scenography. What would it look like if the film was made in Prague with the Bata Shop building in the background (Ludvik Kysela, Bata Store, Prague 1929), or in Brno in front of Josef Kranz’s 1929 Café Era, using the building’s neon E-R-A sign to light the street on a Metropolis night? In fact, why wasn’t the film shot on Warsaw’s “Ulica Przyszlosci” (“Future Street”) designed by Lech Niemojewski in 1925?

Paweł Ksi? żek’s paintings and photomontages function as his tools in effacing the border between document and fiction. By juxtaposing and overlaying these two historical phenomena, connected by a trust in the future and contemporaneously created in different places in Europe, Pawel Ksi? żek has built a new version of the world and his own fake vision of the past. Silent Utopia is simultaneously a historiographical examination of an era and an idealism and a reckoning of the development of the aesthetic relationship between Eastern and Western Europe in modernity. The work that he has created based on archival materials is principally surreal. Asserting that both the past and the future are inaccessible to us, Paweł Ksi? żek offers us the potentially most efficient way to get know them, in fantasy.