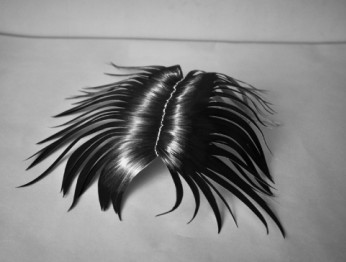 Opening: Friday, March 18, 2011 from 6 to 9 pmFrench critic Nino Frank is often given credit for coining the term “film noir”. He alleged that the novelty of film noir is its shift of the emphasis from the action to creating expressive model characters e.g.: the detective in a trench coat or the demonic femme fatale in a satin dress with a cigarette in her hand. In his drawings Pawel Olszczynski goes one step further—he abandons the characters and focuses on their props. In his work items of clothing subjectively become phantoms of the body. It is his private world—a fantôme noir.
The world of fashion has long reached far into areas of art. Many designers like Rei Kawakubo, Maison Martin Margiela or Gareth Pugh are inspired by artworks, and their collections are often more reminiscent of collectable objects or sculptures than of actual clothing. Olszczynski asks, however, what happens if we reverse the direction of fascination. What if art falls in love with fashion? He cites the exclusivity of the handmade in fashion which in the art world has become too self-evident. His paper sculptures are wigs, purses and wallets and refer to haute couture in fashion. They are as fragile and as transitory as fashion trends.

Olszczynski seems particularly fascinated by black and the possibilities of the ordinary pencil (again, a reference to the art-world)—sometimes deep black, soft and velvety, and at others dry, precise and thin as a hair. He also radically juxtaposes the texture of materials like skin, fur and hair. He pulls his favorite motif—mostly unnaturally styled hair, that evolved into fetishes—from fashion magazines. He repeatedly returns to this motif while at the same time consciously celebrating the ritual of the obsessive, compulsive repetition, which manifests itself in an obsessive quest for perfected execution. The process of creating drawings is time consuming and laborious—physically and mentally exhausting. The hair on Olszczynski’s works is tangled, dominating the entire surface of the sheet. While repetition should satisfy, it provokes anxiety and a feeling of helplessness.

Olszczynski’s strategy is to analyze the medium of drawing. His works are a kind of visual tautology: on a piece of paper you see a piece of drawn paper, folded like a sheet of paper, Untitled (Sheet of Paper), or the drawing of hair that he shapes into the likeness of hair or a wig. The artist creates objects with his drawings. Ironically, this practice of repetition exposes the limits of mimesis. The more Olszczyński tries to convince us that a picture is reality, the more it is impossible. As a reward, however, he reveals the natural characteristics of the drawing medium.