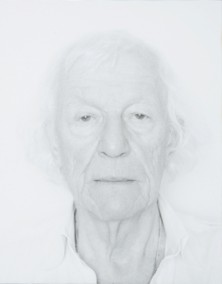 Opening: Friday, April 29, 2011 from 4 to 9 pmRoman Opałka is one of the most radical and famous conceptual artists to date. In his life long project entitled Opałka 1965/1-∞ he paints consecutive numbers in white colour on canvases of consistently equal dimensions (195 x 135 cm), since 1965. At this time Opałka has reached the number 5 590 000. On the occasion of Opałka’s 80th birthday ŻAK | BRANICKA presents eight of his photographic self-portraits. This is the first exhibition of his work in Berlin in seventeen years.
Opałka operates on the principles of progression and the visual and pictorial representation of time. “The foundation of my work, to which I have devoted my life, manifests itself in a process of recording a progression that both documents time, and also defines it," states the artist. This decades long project is to be understood as one complete work. He began in 1965, with the so-called Details—painting on canvas—and expanded this idea into different media over the years. Integral to this project are his photographic self-portraits. Taken at the end of each work-session we see Opałka with the canvas he is working on in this exact moment in the background. These photographs are entitled Detail as well—appended to the title is the number that he stopped painting at in that exact moment in time. Each image is taken under the same conditions, with the exact same lighting, distance between him and the camera and the same dimensions (24 x 30.5 cm). In every self-portrait he wears a simple white shirt and looks directly, expressionlessly into the camera. From these individual portraits emerges a larger self-portrait of the artist taken over the years while working on Opałka 1965/1-∞. While each photograph defines a precise moment in time, together they function as an overall picture of the artist. From day to day and year to year his face ages, and within forty-five years a series of photographs emerge that make visible the otherwise imperceptible passage of time. While the first canvases were painted on dark background, Opałka has been lightening the background of each painting by 1%, since 1972. Having worked through all the grey tones by 2008, he has been painting white on white since then. He calls this colour “blanc mérité" (well earned white). As with the painting, the colour of the photographs subtly lightens up from one work to the other. In the early self-portraits the artist still had dark hair. Today his white hair nearly merges with the background. The eight photographs presented at ŻAK | BRANICKA gallery will be shown in an octagonal shape. Swiss architect Jean Nouvel initially designed the octagonal shape as a possible presentation for Opałka’s Details in 2002. The photographs are always installed at the exact height of the artist so that the eyes on the work are at the artist’s actual eye level. It is in this way that the precision that marks Opałka's process and works, is carried through to the exhibition. Every single painting and every single photograph are part of the entire project, striving for infinity. He estimated that a person with an average life span is able to achieve the limit of seven sevens (7 777 777). This “Horizon of sevens" is a definitive frontier and is unthinkable that Opałka will be able to reach the next plane of eight eights (88 888 888). The progressive, potentially unending process of counting will therefore end only with the death of the artist.