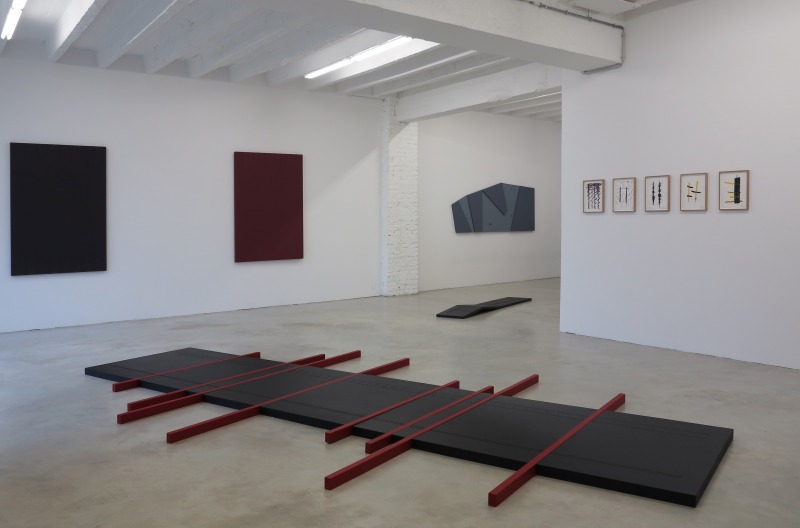 Time Sculptures – Conceptual Work from the 1980s.
Opening: Friday, 18 September 2015, from 6 to 9pm
Exhibition: 17 September – 07 November, 2015
On the occasion of the Berlin Art Week 2015, ŻAK | BRANICKA is pleased to present a selection of unknown works by Ryszard Wasko, conceptual artist. After Time Frames – Conceptual Works of the 1970s, Time Sculptures – Conceptual Works of the 1980s is the artist’s second solo exhibition at the gallery. It calls to mind the diversity of recently rediscovered art of the 1980s. The works shown in the exhibition are concerned with sculptures that deal with the ideas of time and space in how we perceive structure from different points of reference.
For Wasko, the transformation that took place in his art from the 1970s to the 1980s is tantamount to a shift from video and photography to sculpture and painting: during this period, he extensively tested the boundaries of the different media. In his private life as well this was a time of great change. Immediately after his participation in the famous Pier + Ocean show at the Hayward Gallery in London in 1980, he organized the legendary exhibition Construction in Process in Łódź, Poland, which was described by Richard Nonas as an event "that happens only once in a generation”. The years that followed were very intense for him politically. Eventually he emigrated, first to England, and then to Berlin, where he received a scholarship of the German Academic Exchange Service (DAAD). Later, he came to realize that he had considered his earlier artistic activities as a kind of battle, whereas the Berlin years had brought him artistic freedom. In order to begin anew in Berlin, Wasko had to return to his roots: to the history of the avant-garde in the 1920s, and the origins of experimental film with which he had grown up during his studies at the Łódź Film School. Here, especially the artists of the group "BLOK” were of significance: Katarzyna Kobro, Władysław Strzemiński, and Mieczysław Szczuka. This is where he established a link in his work: his point of departure, were the writings by the author of The Theory of Vision, Wladyslaw Strzeminski. Wasko’s relief images From Darkness into the Light, whose color transitions are hardly perceptible to the human eye, recall Strzeminski’s "unistic” compositions, and yet they are by far more radical than these. In Time Sculpture of Black Paint (1986) and Run Up And Cross (1985) Wasko started with separating a standard 35 mm film by breaking the linear continuity of the frames. This changed the rhythm and tension. He used different techniques to create these sculptures such as drawing and painting to create relief like surfaces by building up layers of paint on different materials such as cardboard, linen and wood. In this time consuming process of applying countless layers of paint he worked towards a three-dimensional pattern that eventually emerged from it. In Wasko’s works, time is an indispensible factor of the viewing process that connects both sculpture and film. In 1987, Wasko created a small sculpture in a private garden in Berlin Zehlendorf that carried the title Quinta Essentia: a sculpture made of air, for which a hole in the shape of a step pyramid was scooped out of the earth. The geometrical form of the sculpture, not corresponding with the natural qualities of earth in any way, indicates that the sculpture was only supposed to have a short life, lasting at most up until the next rain. This project was followed by others, – most of them unrealized or unrealizable –, such as the idea of a pink fluorescent tube that was to be placed inside a hole in the ground filled with milk and then frozen (Rose-Milk Sculpture, 1988 - 1994). His utopias also take place on the canvas, as with the series of pictures painted with pure pigments, in which the same highly odd, sharp-edged forms are repeated again and again. These are lakes: Twin Green Lake (1989) and Green Lake Along Blue Path (1990). Why do lakes like these do not occur in nature? After all, there are mountains and rocks that appear to be angular, stair-like variations of a theme of more basic geometrical shapes, such as the square. "To understand the square was easy, yet I wanted to look inside, and explore its inner tensions. Hence these forms similar to staircases.” Simple elements like these require simple actions: "There was something ritual about it”, Wasko says.