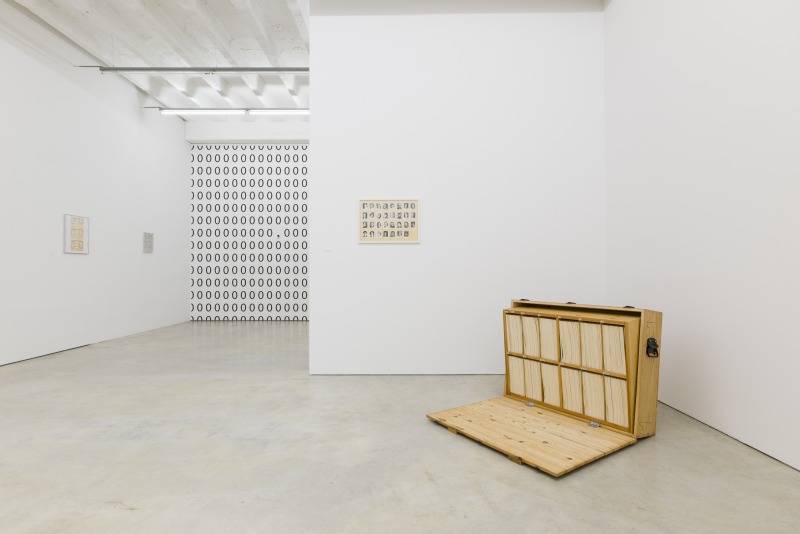 Continuum
Opening: Friday, 29 June 2018 from 6 to 9 pm
Exhibition: 30 May – 08 September, 2018
photo: Jarosław Kozłowski, Continuum XL, performance at Galeria Entropia, Wroclaw 2018
ŻAK | BRANICKA is proud to host Continuum, a group show with Stanisław Dróżdż, On Kawara, Jarosław Kozłowski, Roman Opałka, Barbara Schmidt-Heins and Gabriele Schmidt Heins for the first time exhibited together. The sense of duration, time and space, that has accompanied mankind since the beginning of civilization allows us to consciously define our existence here and now. To believe we are part of a process, whose continuity has a significance. The concept of the space-time continuum (Raum-Zeit-Kontinuum) was developed in the early twentieth century by physicists Albert Einstein and Hermann Minkowski. It seems that, since then, the subject has been exhausted. Interestingly, however, in the 70s, many conceptual artists tried to visualize the continuum in their ways, intuitively engaging in the topic. In this period, the process became an inseparable component of the artistic practices. The title of this exhibition comes from two of the featured works: a performance by Polish conceptual art pioneer Jarosław Kozłowski and an installation by visual poet of the avant-garde, Stanisław Dróżdż. Dróżdż’s 1973 piece is recreated at ŻAK | BRANICKA as a mural on a gallery wall –  rows of zeroes strung before and after a comma. It might seem surprising or unconventional to mathematicians, but nonetheless feasible. Art lovers, will interpret it as a poetic depiction of the continuity of time or space "forward” and "backward,” into the past and the future: into infinity. Moreover, this work precisely locates the point where "backward” infinity is divided from a "forward” infinity. This point, the decimal, is this moment, the here and now. On Kawara defined this point between "before” and "after” in numerical works, in which he painted the daily date. This process was accompanied by telegrams sent from various points on the globe with the message: I’m still alive. Roman Opałka, in turn, has counted from 1 to infinity in his 1965 / 1–∞ works he visualized continuity. His project also wove in the tragic fate of man, with his limited time to experience the inability to reach infinity. While Opałka inscribed this phenomenon numerically, Stanisław Dróżdż again achieved it visually in Duration (1968/9), writing the word "duration” dozen of times with no spaces in between, or putting three phrases – "was,” "is,” and "will be” – in the form of an hourglass (Hourglass, 1967). Time and space were also explored by two German sisters in the 70s, Barbara and Gabriele Schmidt Heins. Barbara Schmidt-Heins’ monumental 1979 is a collection of 365 notebooks, one for every day of the year, in which the artist numbered all the minutes of a day, from 12:00 a.m. to 12:00 a.m. Once a day, in one notebook, she highlighted the passing minute in red. In another work she wrote: Bis zu diesem Zeitpunkt ist alles Vergangenheit. Von diesem Zeitpunkt ist alles Zukunft. [Everything is past until this time. Everything is future from this moment.] Gabriele Schmidt Heins, in turn, visualizes this phenomenon through directions. Orientierung im Raum: links, rechts (politisch) [Orientation in Space: left, right (political)] of 1972 is a small shelf with two books that are mirror images of one another. The title of one is LINKS [LEFT], the other, RECHTS [RIGHT]. Standing before this work, the viewer is precisely in between, in the here and now, with an infinity to the left and an infinity to the right. In Library of Time (2007), Jarosław Kozłowski also shows space-time links: four alarm clocks painted black pointing toward the four corners of the world: North, South, East, and West. Meanwhile, his above-mentioned work, Continuum, is a performance repeated since 1979 in various places, during which the artist entirely covers a blackboard in chalk and then cleans it, returning to where he began. This process lasts around twenty minutes every time and, despite the identical script, it is never the same.