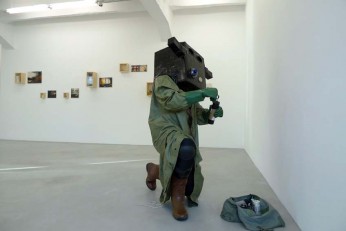 Civil DefenseOpening: November 20th, 2009, 6-9pmParanoid protuberances of science are Szymon Kobylarz’s source of inspiration. He is interested in quasi-scientific absurdities and the border on which rationality and obsession fester.
In his newest work, realized for Gallery ŻAK | BRANICKA, Kobylarz utilizes experiences from his school days. At that time and in light of the Cold War, all the Warsaw Agreement member states established “Civil Defense” courses. The subject matter of these lessons regarded defense mechanisms pertaining to various threats and the requisite behavior in the case of catastrophe. The children learned First Aid measures. They also obtained basic knowledge of the building and handling of weapons.
For Kobylarz, the “Civil Defense” course had a completely different meaning: it was a frame in which the boys were finally allowed to play war. At that time as well as now, he is so engaged by the provisional and abstruse conception of homemade emergency equipment that he dedicated the entire exhibition to it.
With “Civil Defense” Kobylarz asks the questions, what happens to science if it takes a wrong turn?  How far can science let itself be compromised and perverted? While working on this project, the artist transformed himself into a kook inventor and in that process he turned towards an antiquated artistic model: he has repositioned art between science and Utopia.