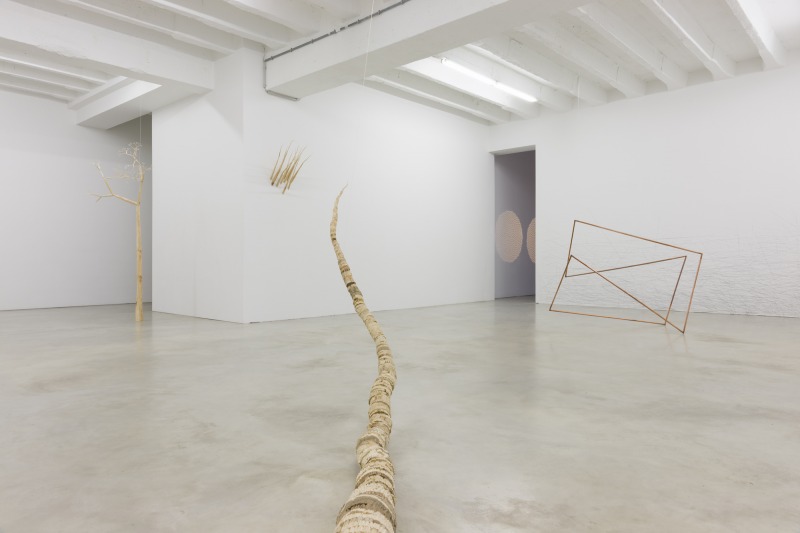 Fibonacci Chaos
Opening: Friday, 13 November 2015, from 6 to 9 pm
Exhibition: 14 November, 2015 – 09 January, 2016
ŻAK | BRANICKA is proud to present Fibonacci Chaos, the third solo show at the gallery by artist Szymon Kobylarz (b.1981, PL). Szymon Kobylarz is an artist who likes to draw from the methods and accomplishments of science.
He is not interested, however, in what science has proven and explained; his passion is for things whose existence science acknowledges, but for which it still has no response. Kobylarz has explored parascientific theories, simulations, and scientific visions (The Man Who Survived the End of the World, 2011), he has investigated areas where the rationality of science has phased into madness (Model 1:1.5, 2007) or has verged on conspiracy theory and paranoia (Echelon70, 2009), and where science has failed, becoming a caricature of itself (Civil Defence, 2009-2012). He is fascinated by the application of a rational element in guesswork and hypotheses: he has reconstructed legends (The Story of Alojzy Pi? tek, 2009), police information (Stuffy, 2010), and press reports (The Cell of Mr. Jan Kolano, 2008). In his latest exhibition, Fibonacci Chaos, Kobylarz focuses on mathematics, and in particular the way the Fibonacci Sequence, the "φ” (phi) numeral, fractal geometry, and the golden ratio appear in natural constructions: from the DNA code, through human proportions, the height of plants, the shape of a snowflake, hurricanes, and the shape of galaxies. This phenomenon is commonly known (theories about this are particularly popular on Youtube), yet to this day it has no known explanation. In his works from the Fibonacci Chaos' series, Kobylarz transfers precise numbers onto simplified forms that imitate nature. He builds models of bushes and trees out of wood, while the length, thickness, and angle of their branches is calculated and determined by a formula. This is how the "perfect tree” models are made. Nonetheless, despite very precise premises, the final effect is beyond control: "I believe that with these works I am showing the inconstancy of the human hand as compared to the precision of numbers, mathematics, and computers, which deal much more quickly and precisely with such simple figures. The mistakes I make while sculpting these works, however, are much the same as what the wind is for the trees,” says Kobylarz. The calculated aesthetic component is an essential part of the project. All the works are based on the Fibonacci Sequence, and as such, are directly linked with the number "φ” (phi), also known as the golden ratio, which is deeply rooted in our culture. When we use it we inevitably find harmony and eye-pleasing proportions. A major element of Kobylarz’s work is the use of simple materials and production technologies involving manual processing. The material used is mainly various kinds of wood recycled from waste products. On the one hand it is biological, and on the other it has been machine processed (and prepared for use by technology), or previously served as ready-made household products (chairs, tables, etc.). Reworking this wood back into biological forms, it becomes what it previously was. The process of hand-working the material provides the opportunity to make mistakes, and is the opposite of the initial precise mathematical construction. The intersection of human error, the unpredictable material (there are cracks, knotholes, and the type and quality of the wood), and cold mathematics is crucial to the artist. Kobylarz’s work is like visualizations of mathematical concepts, even more, it tests them – insofar as a model construction by its (concept) formulae (or rules) is true. Johannes Keppler once claimed that "God is a mathematician,” and that "geometry existed before the Creation, is co-eternal with the mind of God, is God Himself.” If so, Kobylarz is checking if God also makes mistakes: only art could be so bold.