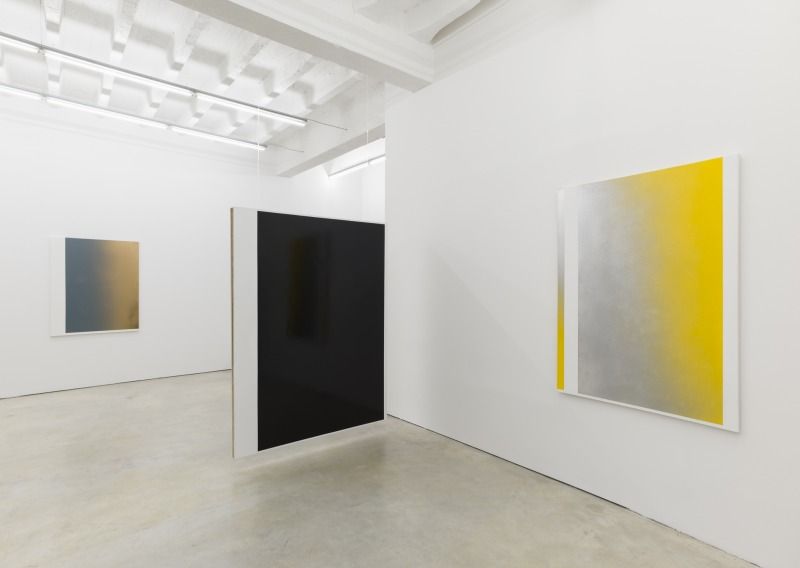 Black Mirror
Opening: Friday, 27 April 2018 from 6 to 9 pm
Exhibition: 26 April – 23 June, 2018
We are proud to present, as part of Gallery Weekend Berlin 2018, the first solo show of Tomek Baran at ŻAK | BRANICKA, marking the beginning of our cooperation with the artist.
As part of Gallery Weekend Berlin 2018, ŻAK | BRANICKA is proud to host Black Mirror, Tomek Baran’s first solo exhibition at the gallery.
Tomek Baran (born 1985) works to challenge our sense of materiality. His objects cannot be defined by a single discipline, only by a combination of painting and sculpture, creating a playful displacement of both. Perhaps the most accurate definition would be that they are ready-mades which often evoke a postindustrial mood. Baran uses a blend of materials to create a performance-like space, where the objects work together to form their own interventions. The surfaces of his paintings vary from shiny metallic to a concrete matte, encouraging the viewer’s eye to interact with the constructions shaped under the canvas. He focuses on problems of space, and looks for the relation between his own abstract work and that of architecture and sculpture. Growing up in Stalowa Wola, an industrial city in post communist Poland, Baran’s keen aesthetic sense was thirsty for something different. He chose not to create something new out of refined materials but to repurpose what he knew.
Significantly, Baran calls himself an "abstract hooligan”. His work is a subversive game, he takes an ironic stance toward his own work, perceived as a place of art and non-art, painting and non-painting, surrounding reality and virtual reality. If this is so, the artist seems in fact to be questioning the traditional idea of the abstract as utterly divorced from reality. The natural and artificial lighting, the shadows and shadings working together with the picture objects, undergoing constant change depending on the angle from which a work is viewed. The avant-garde artists claimed that movement and light destroy static realism in painting. In Baran’s work, movement and light conspire with the abstract forms, becoming inseparable components in viewing his work.
Baran operates simultaneously within postindustrial art, abstraction and new media aesthetics.  He sometimes uses the notion of the "gradient,” or movement in computer graphics, the smooth tonal transitions between colors. He thus evokes digital imaging systems, which can be seen in his golden-white works. As such, his monochromatic, dark painting-objects can also be viewed in terms of digital culture, and thus gain a wider meaning. They do not bear direct reference to Kazimir Malevich’s Suprematism, but rather to virtual reality, and the symbolism of the "black mirror.”
The "black mirror” concept has been popularized by the popular British TV show of the same title, which examines modern society, particularly with regards to the unanticipated consequences of new technologies. It is a show about how these technologies change us and how digital progress interferes with human nature – developments in media and social media. Our lives are inseparable from and immersed in computer reality, but when we turn off our phones, tablets, or computer and look at them, we see our reflection in the dark "mirror.” In the black reflective surface of a digital screen we see a blurred image of ourselves on the other side. This is, in fact, a reflection of the loneliness and isolation of the digital age and a reflection of our true faces in a social media reality.
Virtual reality, like the mirror example, is a space that may be called a "heterotopia,” in which images exist, though the space itself does not exist in reality. Baran’s objects, matte and covered with various paints, may be also described as heterotopias. According to Michael Foucault, a heterotopia displays a "counter-place,” an irreal space in which we can see ourselves where we’re not. It is a space that simultaneously does and does not exist, just like the other side of mirror – the space of the inverted reality. In this sense, Baran’s monochromatic objects, matte and covered with dark paint, may be also viewed and regarded as heterotopias. As separate artworks and all together as artistic installation, they create a feeling of being on the other side of the picture. This equals the experience of being in a place without a place. In this way, Baran’s paintings, objects and installations undoubtedly work through intuition and immersion, as if the viewer has found himself within the picture.
The artist appeals to the viewer’s sensitivity and emotional involvement. Entering the show, we may find ourselves before black mirrors, within multiple realities that are simultaneously virtual, abstract, and postindustrial. The exhibition is thus determined by heterotopias, constructions of places we can experience without physically being there. As viewers, we can connect with other individuals in these heterotopias, but each person will have his or her own unique experience. Through the symbolism of the "black mirror” we can finally immerse ourselves, and dive deeper and deeper into the dynamic and shiny reflections of the dark surfaces of the works of art.