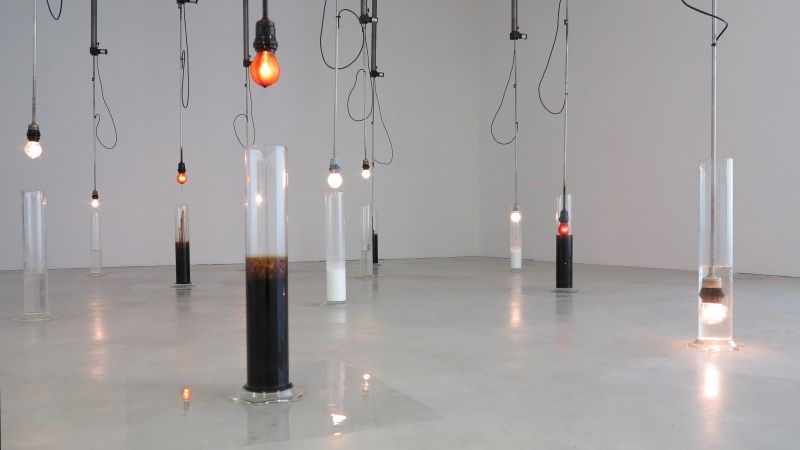 Opening April 26, 2013, 6 to 9 pm in the frame of Gallery Weekend Berlin 2013
Opening times during Gallery Weekend Berlin 2013: Saturday and Sunday from 11 am to 7 pm
Screening of METANOIA: 29 videos by VALIE EXPORT June 6, 11 am to 9 pm
ŻAK | BRANICKA is delighted to present Bilder der Berührung [Images of Contingence], an exhibition of works by VALIE EXPORT to be shown during the Gallery Weekend Berlin 2013. The exhibition highlights the artist’s groundbreaking expressions of physical contact and its implications in various media, including installation, drawing, photography, film and archival materials. The title of the exhibition is rooted in VALIE EXPORT’s installation work Fragmente der Bilder einer Berührung [Fragments of Images of Contingence] of 1994, in which pole- and wire-hung light bulbs are rhythmically immersed into cylinders filled with milk, used oil, or water. These liquids are fundamental sources of our existence. At the same time, their physical fusion with electricity implies a life-threatening danger—a contradictory, yet also mutually conditioned state of joining and repelling. The rhythmic movement in this work is repeated in a second installation of the exhibition, Die un-endliche/-ähnliche Melodie der Stränge [The un-ending/-ique melody of cords] of 1998, a recording of a threadless sewing machine and its sound.
Contingency, liminality, and sensual experience likewise permeate the artist’s video works as themes, a selection of which will also be shown, including one of her most famous works, TAPP- und TASTKINO [TOUCH CINEMA] (the Munich performance of 1969). During this performance, the artist wore an aluminium box around her naked chest, allowing passersby to enter her miniature cinema as visitors with their hands. "To see the film, that is, in this case, to touch and feel it, the viewer (user) has to guide his hands through the entrance into the screening hall. With this, the curtain, previously only raised for the eyes, is now finally raised for both hands. The tactile reception takes a stand against the deception of voyeurism. For, as long as the citizen satisfies himself with the reproduced copy of sexual freedom, the state remains spared from the sexual revolution”, EXPORT states. In its confrontation and appropriation of the male gaze, this iconic performance has become a symbol of feminist art.

The motif of touch reappears in VALIE EXPORT’s series of drawings dating from the beginning of the 1970s. Depicting hands that protect or caress, hands that suffer, and hands that create suffering, these works, as all others, configure an iconographic index of the human body, and particularly a woman’s body; the individual parts of which inscribe and are inscribed with meaning. Its capacity for "touch” is most telling: It is testimony not only to sensuality, intimacy, and carnality, but also to aggression and violence. As EXPORT says: "For me, contingence is how and where you perceive borders, and how and where and when borders explode.”

Aside from the aforementioned works, various photographs and display cases showing archive material and documentation from EXPORT’s long-standing artistic career (specifically compiled for the exhibition VALIE EXPORT – Archive at the Kunsthaus Bregenz in 2011) will complement the exhibition.