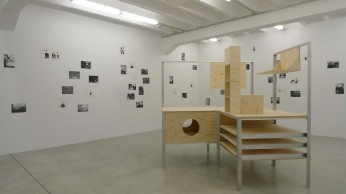 Obsessive SettingOpening: Friday, November 12th, 2010, 6-9 pmAfter the dream, they set out in search of that city; they never found it, but they found one another; they decided to build a city like the one in the dream. Italo Calvino, Invisible Cities On July 26th, 1963, Skopje (Macedonia) was hit and destroyed by a devastating earthquake. In 1965, a team of Japanese architects, ‘Kenzo Tange Associates’, was invited to compete for and eventually won the opportunity to construct a new Master Plan for the city. However, this original plan was never fully implemented.

Yane Calovski’s investigation of the process of articulating and executing Kenzo Tange’s Master Plan delves deep into the conflict between individual utopian dreams and those of a collective body, at the time especially significant in Eastern Europe as well as in the rapidly changing Japan. Calovski collects evidence of displacements and transformations through diverse narratives, scrutinizing the details of production, of failures and unrealized ambitions, and finally the causes for these lapses - here adding his artistic interpretation. The project, entitled Obsessive Setting, has been developed specifically for ŻAK | BRANICKA Gallery and continues Calovski’s ongoing Master Plan project that was presented at Manifesta 7 (2008) and in Book 3 – Lapses for the Turkish Pavilion at the 2009 Venice Biennale: “…The project is also about the memory construction of a nation. Kenzo’s Master Plan of the city of Skopje clearly indicates a common dream, which indeed failed and could only be applied to a certain degree. […] Planning the city suggests designing the lives of its inhabitants. In that respect, Master Plan was the subject of this beautiful future dream. Somehow, it faded out…” (Başak Şenova curator of the Turkish Pavilion at the 2009 Venice Biennale). Obsessive Setting, will manifest itself as a repository modular structure that serves as an ideal storage unit for possible processes and meaningful archives. Structurally, the unit refers directly to Kenzo Tange’s original architectural model which is currently stored in the Museum of the City of Skopje. Calovski’s object is made up of drawers, screens and mirrors. In addition, it provides its potential user with room for work and respite. The drawers’ contents (drawings, photographs, texts) and the screened videos, will change in the course of the exhibition, turning the object into a manifestation of Calovski’s obsessive, particle-by-particle reconstruction of Tange’s extensive work. Calovski will also be consolidating a part of the original planning team (Samon Takahashi, FOS, and Srdjan Jovanovic Weiss) and associates with whom during the course of the exhibition he will build the archive, as well as develop a context for responding to the original Master Plan by Kenzo Tange. Yane Calovski’s work is conceptual and context-based. He has lived and worked in the United States, Japan, the Netherlands and Macedonia. Recent solo exhibitions include Ponder Pause Process (a Situation) at the Tate Britain (2010)  and Hollow Land/ Master Plan at European Kunsthalle in Cologne (2009), as well as Manifesta 7 (2008). His works form part of the Deutsche Bank collection in London. He currently lives and works in Skopje.